Acer Iconia Talk S can hardly fit into a specific smartphone category, because of its 7″ IPS LCD display. It’s more phablet than a smartphone, as all 5.5-inch and larger are, in our opinion. But it’s not about size, as they say, quality over quantity, and unfortunately, that’s the case here as well. The screen isn’t impressive at all on a screen this size, as you probably guessed. It simply doesn’t offer a sharp image, although colors aren’t so bad, it’s an IPS LCD panel after all. So let’s talk about other specs of Acer Iconia Talk S, and if it’s worth the money.

First of all, thanks to the screen we mentioned, and the price, it reminded us of Xiaomi Mi Max, which has a very similar price. Just like this one, it has a screen over the size of current standards, which at least makes it stand out. But not for the good things, in our opinion – as this one, although beautiful, weighs 260g and more! That’s too heavy for a phone, plus it’s 9.4mm thick! We just don’t like that aspect of it, but some of you might. The only available color is black, which isn’t bad, honestly.

We’ll just tell you a few things additionally about the screen, and leave it at that. It’s one of those that you whether like or not, as simple as that. So, besides the resolution of 1280 x 720 pixels, it sports just under 70% screen-to-body ratio and 210 pixels per inch pixel density. That’s lowest we’ve seen, although similar to Xiaomi Redmi 3x, which is in that price range. That one has just a bit more of density, although 5-inch screen and the same, HD resolution. That’s just for reference, to give you an idea.

Where Acer Iconia Talk S camera is in question, it’s pretty bad, we’ll be honest with you. For low-light conditions especially, while during the day you can capture some amazing shots. It’s 13 MP of resolution on the back and without flash! That’s a standard feature of all phones we’ve seen, and it’s kinda weird to see it missing. It records 1080p videos in 30 frames per second, so that’s good, but don’t expect anything as soon as the night creeps in. The front camera is only 2 MP and records 720p videos. There are other features like HD and face detection, although we’re not sure how useful they actually are. It’ll be up to you to test it and tell us.

Performance-wise, Acer Iconia Talk S features a Quad-core processor based on MediaTek MT8735 architecture along with Mali-T720MP2 GPU. Add 2GB of RAM to that, and you’ve got a decent set of peripheral underneath. It won’t play most demanding games or 3D ones, but it’ll serve you reliably for light multitasking and navigating through the menus. It does come in two versions, of 16 and 32 GB of internal memory, and a microSD card slot to expand its storage. The platform it ships with is Android 6.0 (Marshmallow) and the battery is of 3400 mAh capacity, easily lasting you a day or maybe two, knowing the resolution. 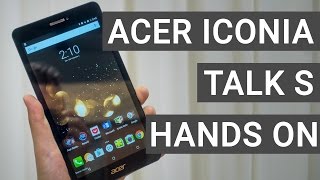 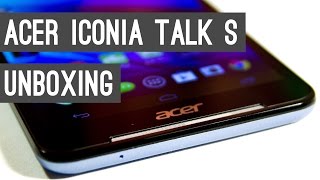 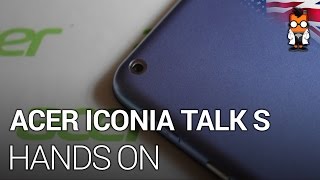 5.7
Post a Review Please note that each user review reflects the opinion of the respectful author. To get approved, make sure that the review is big enough and contains unique opinion.