Acer Predator Triton 700 is another Predator laptop we use and love, coming from Acer this year. They really outdid themselves with this one, especially when it comes to design. It is black, with a blue backlit low-profile keyboard. The keyboard looks and feels like something halfway between the island-style and deep, towering keys of standalone mechanical keyboards. It delivers a nice clicky sound with a key travel measuring 1.3mm so the keys are a little too stiff. But why settle for default blue backlit? You can program each of Acer Predator Triton 700 keys to flash one of the available 16.7 million colors. You can do all that in PredatorSense software, along with 11 available effects with adjustable speeds.

Let’s go through Acer Predator Triton 700 specs, and what makes it come on top: they managed to make it extremely thin for the contents inside. You would expect for it to have a GTX 1060 (and it does, in the less expensive version) but they managed something else. You can see a Nvidia GeForce GTX 1080 running like a beast without compromising on the thickness of the laptop. That’s not all – you have a standard 7th generation Intel Quad-core i7-7700HQ 2.80 GHz thrown in as a plus. That combination is let’s say – deadly and ready for any challenge thrown its way.

With Acer Predator Triton 700 you are ready to play games, watch Netflix, do any design work or render right away. The reason we can confidently say that is because it’s packed with either 16GB or 32GB of RAM for you to choose. Whichever of these you pick, you’ll be a happy guy/girl, and can’t wait to start using it. Acer Predator Triton 700  doesn’t pack 4K resolution though, which might prove as a bit of a problem for you. You are getting a full HD screen of 1920×1080 resolution, and that doesn’t hurt yet.

We’re running into a bit of a problem here when it comes to Acer Predator Triton 700 features – the battery. You probably already know that 4K is the main battery killer, and this one possesses only full HD. What’s the problem then? In our tests, it showed only about 3 hours of use for streaming before it went cold. We know some of Acer Predator Triton 700 gaming laptop rivals can hold for a bit more with heavier usage. This proved to be a disappointment from Acer, as you’ll have to be close to an outlet at all times.

The price of Acer Predator Triton 700  is starting from 2339$ and goes up to 2999$ for the stronger version. For your precious dollar, you’re promised to get a Dolby Atmos stereo speakers system, but that hasn’t proven best. The audio software does provide multiple ways to enhance audio, but as always, we would recommend using headphones or external speakers. The touchpad is on top of the keyboard, which makes it nearly impossible to highlight or change tabs. What’s even worse, the touchpad is over the peripherals which get very hot on heavy usage. And with GTX 1080 you’d wanna push it to the limit! That means you’re better off using a good old mouse or customize the CoolBoost app that comes pre-installed. 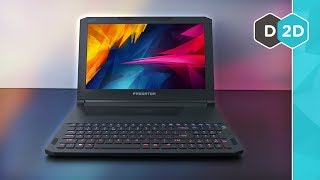 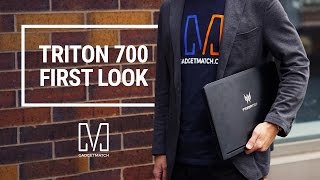