You have probably heard of Apple AirPods by now. They’ve been widely either critiqued and praised, depends on which aspect you look into. When it comes to their compatibility, they connect effortlessly to your iPhone device. You can find them in White color, but some separate companies offer a service of changing that. As long as you’re compliant with that, they will paint a pair of Apple AirPods with custom color and pattern. Then they’ll ship them to your address, and don’t worry – you’re not getting anything refurbished. It’s a pair of brand new ones, so you get to be unique and cool. How about that!

It’s time we talked about Apple AirPods specs. You probably noticed the lack of cables by now. That’s because they’re completely wireless, but connect fast and efficient. They look just like an ordinary pair of headphones, to be honest. But not only are they louder, they cost a bit more too. And not by a little, because a price of Apple AirPods for a pair is about $160. But in our analysis, they’re worth every penny. The only problem is – will you be falling in love at a first listen too?

That entirely depends on your anatomy, unfortunately. Apple AirPods are made to fit perfectly, but for some people, they fit just perfect. It’s like a mold was created specifically for them, and they can even forget they’re inside their ear canal. For some of us that aren’t one of those, they’re still awesome to use, but not as awesome. You can fit them in your ear and they won’t fall out, that’s guaranteed. We’ve found a problem when doing an Apple AirPods review – just being scared of losing them, or them falling out is real. That’s because they aren’t just an easily replaceable piece of tech, and that fear might cripple you.

If you find yourself being scared as we were, maybe opt for a pair of BeatsX. Although they’re similar in price to Apple AirPods, they at least have a cable. In fact, the cable goes on the back of your neck. Even if they fall from your ear, they’ll hang on your chest safely. That being said, it’s important to realize that Apple AirPods can be charged wirelessly using the box you received. That’s a quite nifty feature, and it really comes useful. Other than that, they have a microphone inside, of course.

You can have your conversations with ease, and sometimes not even notice they’re inside your ear. To wrap up, we want to tell you just why you should pick up a pair of these. First of all, you do get a pair of Apple EarPods when you buy an iPhone. Although good-looking, they have a cable, which is slowly becoming a thing of the past. Apple AirPods will fit your ear more comfortable because of their design. And not only that, they have less probability to fall out because there’s nothing dragging them down. The best feature of Apple AirPods is the Bluetooth chip inside. It will allow for an easy connection with not only one device, but multiple at the same time. 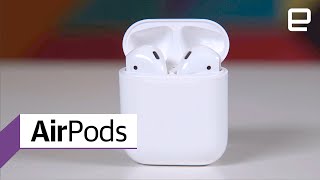 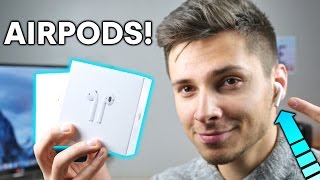 6.5
Post a Review Please note that each user review reflects the opinion of the respectful author. To get approved, make sure that the review is big enough and contains unique opinion.