If you are on the hunt for the most compact but powerful phone, look no further than Apple iPhone 13 Mini. At 144 grams, it’s easily the lightest smartphone in 2022. The dimensions of 5.18 by 2.53 by 0.30 inches also make it among the easily maneuverable smartphones. Where Apple also deserves praise is that it hasn’t compromised on the build materials to make the phone light. It has an aluminum frame besides a glass black and front, both of which are protected by Gorilla Glass. To make things even better, the phone has IP68 certification for dust and water resistance. The phone’s build quality is superb, as is the case with almost every iPhone.

For colors, the options are Starlight, Midnight, Blue, Pink, Red, and Green. Its display quality is awesome, though not everyone will love it because of the smaller size. Apple iPhone 13 Mini has a 5.4-inch FHD+ Super Retina XDR OLED screen which is scratch-resistant. The phone not only has support for HDR10 and Dolby Vision, but also has a peak brightness of 1200 nits. Therefore, you aren’t going to have any issues with the phone on matters of visibility. Both its 85.1% screen-to-body ratio and 476 PPI density are impressive as well. A criticism here could be the lack of 90 or 120 Hz refresh rate, which the competing phones offer.

The presence of stereo speakers only adds to the multimedia experience. Moving to the performance, it is absolutely blazing fast. This does make all the sense in the world since the Apple A15 Bionic chipset is the strongest one in 2022. The gaming experience is also super impressive thanks to the Apple GPU. On the software side, iPhone 13 Mini runs iOS 15 out of the box. Cameras have historically been among the highlights of iPhones and this one is no different, ‘mini’ as it may be named. It has a 12 MP wide-angle camera with PDAF and sensor-shift OIS besides the 12 MP ultrawide camera on the back.

Flip the phone, and you’ll find a 12 MP wide-angle camera in addition to SL 3D depth/biometrics sensor. Apple iPhone 13 Mini has some uncommon camera features including Dolby Vision HDR, gyro-EIS, and stereo sound rec. Video recording is supported up to 4K@60fps. The presence of cinematic video and photographic styles is a plus point as well. The absence of a telephoto zoom lens can be considered a con of this device. Sensors available include a barometer and Face ID. The only major con of owning this device is its battery life. Still, the battery life is decent, and the phone should get you over the day on average use.

The device has a 2438 mAh Li-Ion non-removable battery. It supports 15W fast charging, which pales in comparison to what the competitors offer. For communication, the phone has a lightning port, NFC, GPS, Bluetooth 5.0, dual-band Wi-Fi, and a Hotspot. Apple iPhone 13 Mini comes in at a starting price of $699 and in three RAM/ROM combinations. These are 4 GB / 128 GB, 4 GB / 256 GB, and 4 GB / 512 GB. Considering the price, the RAM size could have been at least 6 GB. It can room for only a single Nano-SIM card, but you can use an e-SIM along with it. Alternatively, you can use two e-SIMs. Connections are supported up to 5G, as expected. 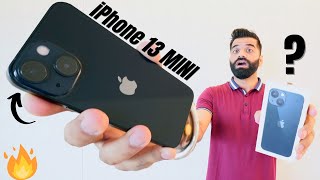 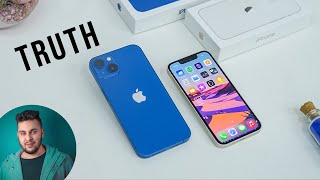