The Apple iPhone 13 Pro Max, which is Apple’s flagship phone, was released on the 24th of September 2021. The smartphone was first announced 10 days back on the 14th of September 2021. Apple A15 Bionic processor which is based on the 5 nm technology powers this device. The processor is considered to be the fastest smartphone processor in 2021. It has a six-core processor, and it sits at the top of AnTuTu benchmark score list for smartphones with 854218 points. Apple GPU looks after your gaming and graphic experience, which is further supported by the 120Hz refresh rate. The phone’s operating system is iOS 15.

The phone has room for only one physical Nano-SIM but can support up to two e-SIMs. However, you can’t use the two e-SIMs and a physical Nano-SIM at the same time. The device measures 6.33 inches, 3.07 inches, and 0.30 inches in height, width, and thickness respectively. The device weighs in at 240 grams, which makes it one of the heaviest smartphones in the market. The Apple iPhone 13 Pro Max scores big in protection, as it has a stainless-steel frame and IP68 rating for dust and water resistance. Also, its glass is scratch-resistant.

Coming to the display quality, the phone has a super retina XDR OLED display. Its screen-to-body ratio is 87.4%, screen resolution 1284 x 2778 pixels, and an aspect ratio of 19.5:9. The smartphone’s PPI density is 458, and it can go up to 1200 nits of brightness. This ensures that you face no issue while using the phone outdoors. The Apple iPhone 13 Pro Max comes in four configurations. The base variant has 6 GB of RAM and 128 GB of internal storage. The other three variants also have 6 GB of RAM but are different in terms of internal storage offered (256 GB / 512 GB / 1 TB).

The price of the four variants are $1099, $1199, $1399, and $1599 respectively. For color, there are four options, Graphite, Gold, Silver, and Sierra Blue. Coming to cameras, the phone has a 12 MP wide, ultrawide, and telephoto camera. The Apple iPhone Pro Max also has a 12MP selfie camera. Features of the rear camera set-up include dual-LED dual-tone flash, HDR, and panorama. iPhones have always been known for camera performance and this phone continues that tradition. When it comes to video recording, both the front camera and the rear camera set-up can record 4K and 1080p videos. The cinematic mode, in particular, is quite amazing.

For communications, the device has dual-band Wi-Fi, hotspot, Bluetooth 5.0, and GPS. While the device lacks Radio, it has USB 2.0 and NFC. In the sound department, the Apple iPhone 13 Pro Max has stereo speakers but lacks the 3.5 mm headphone jack. Sensors include Face ID, accelerometer, gyro, proximity, compass, and barometer. Over the years, Apple users have struggled with battery backup, but that’s not the case this time. It has a 4352 mAh non-removable lithium-ion battery and the battery backup on this phone is nothing short of great. The phone also supports USB Power Delivery 2.0, 15W MagSafe wireless charging, and 7.5W Qi magnetic fast wireless charging.

Seeing how Apple has got almost everything right with this phone, it should be noted that this isn’t an absolutely perfect phone. For instance, some users have faced issues unlocking this phone with the Apple Watch, but Apple has assured the users that they are working on a fix. On the other hand, the device might seem too heavy for some people. Also, the device is expensive even though it falls in the premium segment. 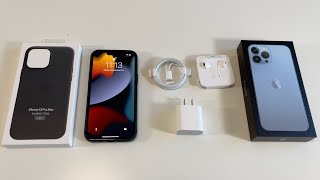 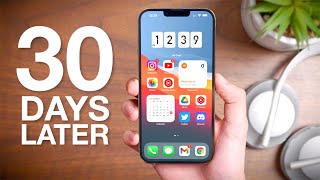