So… Apple iPhone 8 Plus. You’re probably already are aware it’s not the latest model – Apple iPhone X is. Having heard that, it still came out near the end of this year and deserves its own glory. There are some specs we are jealous of, we can tell you that. But will those get you a bang for your buck? We’ll see very soon, but you must be aware of the price – around $940. It all depends on the color choice and the memory you choose, but we’ll talk about that a bit later.

It’s time we started talking about specs of Apple iPhone 8 Plus – screen specifically. The screen is a LED-backlit IPS LCD panel, which is something we love and appreciate. You probably know the deal, as IPS LCD is a part of almost every single flagship smartphone today. We’re aware that it isn’t Apple’s flagship, but it’s hanging pretty close. Moving on – the screen size is 5.5-inches in diameter, which is decent.  The resolution is Full HD – 1920 x 1080. We’re just a tiny bit disappointed, as some smartphones like Nokia 8 have less screen size and more resolution. But it’s not the end of the world, that’s for sure.

Both front and back of the smartphone is covered in glass and protected accordingly. We can thank Ion-strengthened glass and oleophobic features for that. It’s also water and dust resistant, but not immune! Do not make the mistake of trying to dive deep into a lake. Not only can you endanger your life, but it can cost you your phone. The screen is a pleasure to look at, we must be honest with you. There is a Wide color gamut and True-tone display feature integrated, and we’re extremely happy for that.

It’s time we talked about which Apple iPhone 8 Plus specs make it run so fluently. That’s Apple’s chipset called Apple A11 Bionic. One step forward from the previous chipset like on Apple iPhone 7 Plus, and it’s noticeable. The CPU itself is Hexa-core (2x Monsoon + 4x Mistral cores), which if you added those two up is six cores. The GPU doesn’t have a prominent name, so it’s called Apple GPU (3 core graphics). Whatever the case may be, one thing is clear – it works, and it works great. Stay patient to see what in our analysis the camera is capable of:

First of all, the camera on the back is dual 12 MP camera with some nifty features. You’re already aware what the main purpose is – to create good-looking pictures with a blurry background. That way the pictures look like they were taken with an expensive DSLR like Canon EOS Rebel T7i/800D. You can also take a 2160p video with either 24, 30, or 60 fps, and it looks just great. One of the worse features of Apple iPhone 8 Plus is the lack of an SD card. But they made up for it by giving you a choice when purchasing. You can choose between 64 or 256GB of internal memory, depending on your habits. In the end, the battery is only 2691 mAh, which is a bit low by today’s standards. 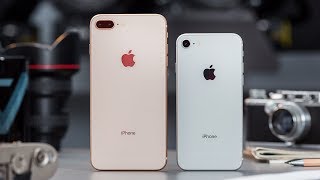 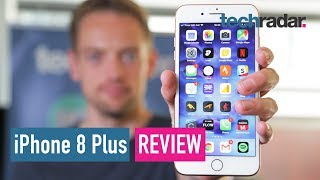