Asus ROG Phone 5s Pro is a premium gaming-oriented phone that completely delivers on the gaming front. While there are phones that provide a better overall package, the whole gaming experience that you get here is unique. However, its price of £1099 ($1370) remains its biggest con. Speaking of gaming, the GPU used here is Adreno 660. The presence of gaming triggers, AeroActive Cooler 5, and X mode further adds to the experience. The overall performance is awesome, but there are phones that do better in this respect. The chipset used here is Qualcomm SM8350 Snapdragon 888+ 5G.

On the software end, the device runs Android 11 with ROG UI on top. The phone is almost perfect in the design department. The reason it isn’t perfect is the lack of any official IP rating. Apart from that, Asus ROG Phone 5s Pro has got you completely covered. It has a Gorilla Glass 3-protected glass back with an aluminum frame. Also, it has a ROG Vision PMOLED display on the back which shows cool animations when you get a call or when your phone is charging. On the front, it is protected by the top-of-the-line Gorilla Glass Victus. The phone is among the heavier phones at 238 grams.

It has a 6.78-inch FHD+ AMOLED screen with a refresh rate of 144 Hz. Asus ROG Phone 5s Pro has support for HDR10+ and it can go up to 1200 nits of brightness. Therefore, you should have no issue using the phone outdoors, even on bright days. Its screen-to-body ratio and PPI density are 82% and 395 respectively. The display quality is good, but considering the rivals, it could have been way better. In the sound department, it not only has stereo speakers, but also two amplifiers. Additionally, it has high-resolution audio and a 3.5 mm headphone jack, which is rarely present in flagship phones.

For this, Asus should be praised. Coming to the cameras, the primary camera delivers a good main camera performance. However, Asus ROG Phone 5s Pro delivers average camera performance in low-lighting conditions. On one hand, you shouldn’t be getting an average low-light performance from such a premium phone. But, on the other, it also can’t be denied that gaming devices aren’t known for their camera performances. It has a 64 MP wide-angle, 13 MP ultrawide, and 5 MP macro sensor camera on the back. For selfies, it features a 24 MP wide-angle camera.

It has gyro-EIS in addition to the usual camera features. The rear camera setup can record videos up to 8K@30fps while the selfie camera’s abilities are limited to 1080p@30fps. As for the sensors, the phone has all the usual sensors including an under-display fingerprint sensor. For communication, the device supports dual-band Wi-Fi, Bluetooth 5.2, Hotspot, GPS, and NFC. It also has USB Type-C 3.1 and USB Type-C 2.0 on the side and bottom respectively. As a result, you can charge the device from the bottom as well as the side, which comes in real handy when you’re playing games.

The battery is one department where the phone is easily one of the best in its segment, if not the best. With moderate use, you should get around two days of power. The phone has a 6000 mAh Li-Po non-removable battery, which is one of the biggest in terms of capacity. The fact that it supports 65W fast charging is another advantage of the Asus ROG Phone 5s Pro. It has 18 GB of RAM with 512 GB of storage, and it comes in Phantom Black and Matte Black. 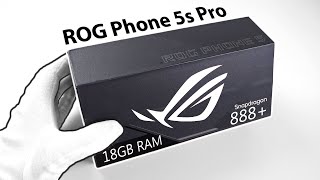 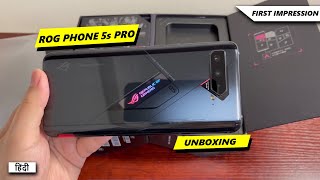