Asus ROG phones are known for their stellar gaming performance, and the Asus ROG Phone 5s is no different. However, it’s a lot more than a great gaming phone. To make this phone more appealing for gamers, the phone has an RGB light panel on the back. Furthermore, the game has pressure-sensitive zones. The overall performance is handled by Qualcomm SM8350 Snapdragon 888+ 5G processor. Since it uses the most advanced Snapdragon processor in 2021, the performance is undoubtedly amazing. The Adreno 660 GPU looks after the gaming and graphic requirements of the phone.

In case, you are not satisfied with the CPU or GPU performance, you can adjust it with the Armory Crate app. On the software side of things, the phone runs Android 11 with ROG UI on top. The multimedia experience of the Asus ROG Phone 5s is fabulous. It has a 6.78 inches screen that can go up to 1200 nits of brightness. Furthermore, its screen-to-body ratio is 82%, the refresh rate 144 Hz, and the PPI density 395. The multimedia experience is also improved by the presence of stereo speakers with amplifiers, high-resolution audio, and a 3.5 mm headphone jack. Looking at the specs, it’s safe to say that you will face no issues using the phone, whether you are outdoors or indoors.

Staying on the topic of the screen, it’s protected by the toughest Gorilla Glass Victus. The device has an aluminum frame while the glass back is Gorilla Glass 3 protected. The device weighs 238 grams and measures 6.80, 3.04, 0.39 inches in height, width, and thickness. Therefore, the device is heavy and is uncomfortable to use with a single hand. This can be looked upon as one of the very few cons of using the Asus ROG Phone 5s. The phone comes at a starting price of $641. The phone has 6 variants. The base variant has 8 GB RAM with 128 GB ROM. The next two variants have 12 GB RAM with 128 GB and 256 GB ROM. The fourth and fifth variant has 16 GB RAM with 256 GB and 512 GB ROM.

The last variant has 18 GB RAM with 512 GB ROM. The storage type used here is UFS 3.1, but the storage can’t be extended as the phone lacks an SD card slot. However, the phone has room for two Nano-SIM cards, which support connectivity from 2G to 5G. Coming to sensors, the device has an under-display fingerprint sensor, accelerometer, gyro, proximity, and compass. Coming to cameras, the phone has a 64 MP wide-angle camera, a 13 MP ultrawide camera, and a 5 MP macro camera.

On the front, the Asus ROG Phone 5s has a 24 MP wide-angle camera for selfies and video calls. The camera performance is decent but not great. It’s also worth mentioning here that the Asus ROG Phone 5s lacks OIS. When it comes to video recording, the phone can do so in not just 720p and 1080p but also 4K and 8K. For communication, the phone has dual-band Wi-Fi, Wi-Fi Direct, Hotspot, Bluetooth 5.2, NFC, and GPS.

Apart from an accessory connector, and USB On-The-Go, the phone also has USB Type-C 3.1 on the side and USB Type-C 2.0 on the bottom. Having USB Type-C on the side, allows you to play comfortably while the phone gets charged. The battery backup is top-notch as well. Even after intensive use, the phone will still last you a day. The Asus ROG Phone 5s has a 6000 mAh lithium polymer non-removable battery that supports 65W fast charging. 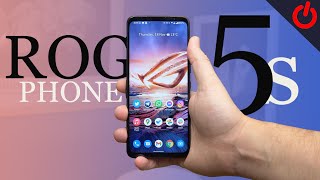 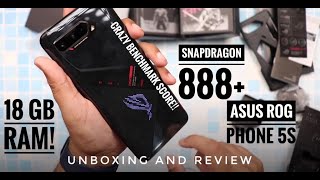