Asus ROG Rapture GT-AC5300 is a gaming router that will make all your wildest dreams come true. The hardware is just exceptional, including a 1.8 GHz processor, it’s able to manage extreme gaming conditions of hardcore gamers. If you ever wanted to get a beast gaming router, now you can, but it will cost you quite a bit. But in order for you not to get discouraged by the cost, we’ll carry on to show you why it’s worth that much. It’s time to see what makes it so great and good-looking.

The design is very futuristic, although not the thinnest around. Plus, it comes with 8 antennas that allow Asus ROG Rapture GT-AC5300 specs to shine through. So you will have to put up with some bulk in order to reach the sky. Of course, this router isn’t for everyone, and not intended for a common home usage. In that case, give either Synology RT1900ac or Synology RT2600ac a look, they might fit you better. In design, it reminds us of RT-AC5300, a previous version of the router, and the standard has stayed the same, as can be seen from the name. But if it ain’t broken, don’t fix it – or so they say.

Asus ROG Rapture GT-AC5300 features a tri-band router with two 5GHz bands, and the top speed going up to around 2150Ghz. The third one is a 2.4Ghz one, just like we’re already used to on wireless routers. It goes up to 1000 Mbps, and supports MU-MIMO, just like D-Link EXO AC2600. This means you can have multiple devices on a plethora of Wi-Fi bands without any signs of slowing down. Moving on, there are capabilities of two WAN port usage. You can turn one LAN into WAN, which simply means you can connect two modems at the same time.

Also, there are so-called link aggregation features, which allows for blending two LAN port connections into a single one. To add to that, there’s a USB port for multi practical usage – storage and other peripherals can be plugged in. What sets this one apart is, because of being a top-end gaming router, a possibility to plug up to 8 LAN cables. More ports mean more people can join the fun, and this one is certainly able to handle it all. So call your friends today, and start a LAN party. To convince you even more – RAM is 512MB, which is great, and the flash memory inside is 1GB, for all the settings and storage needs.

So in the end, what makes the price of Asus ROG Rapture GT-AC5300 being $480 worth it? It’s for one, a great support for online gaming and everything that comes with that. For example, it’s already preset to put games like Diablo 3 on priority. It saves you the trouble of doing it yourself manually and ensures the most bandwidth is dedicated to it. Other popular games are added to the list, but there’s a possibility of it automatically finding you the best server when playing via the Internet. The router can automatically connect to Gamers Private Network(GPN), and choose the best server with the lowest latency for you. A great choice for geeks that are looking to break their bank in order to have the best thing. 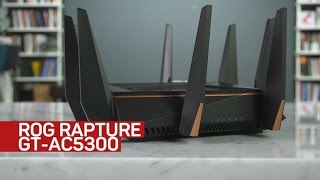 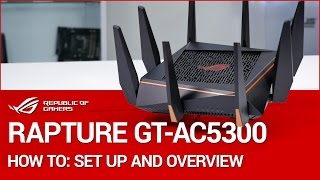 7.8
Post a Review Please note that each user review reflects the opinion of the respectful author. To get approved, make sure that the review is big enough and contains unique opinion.