Asus ROG Zephyrus is a top-end gaming laptop that came out of Asus in 2017. It truly sets the bar high for the competitors, thanks to ultra-thin design, power, and great looks. Up until recently, you could only choose between two types of laptops. Either you had to take a big, bulky, powerful beast, or a portable, thin, but a weak one. Well, those days are no more – it’s the day and age of Nvidia Max-Q designs, where they were able to fit top-end graphics into a thin, sleek frame of a laptop. Let’s hear more about Asus ROG Zephyrus features:

Asus ROG Zephyrus is the laptop that pulls ahead in the race we just mentioned – offering the best specs in a package as thin as an Ultrabook. It isn’t without sacrifices, but we’ll talk more about that later. This beast earned its name thanks to a Quad-core Intel i7-7700HQ (2.8 GHz). You can use Turbo Boost to increase it up to 3,8GHz, and in combination with either 16GB or 24GB of RAM, it’s a great combination. On top of that, they managed to squeeze in a Nvidia GeForce GTX 1080 with 8GB GDDR5 VRAM. That will make you sigh with relief, as you’ll be able to play, watch, and render anything you come across.

What about the screen? Asus ROG Zephyrus screen is of 15,6-inch size, but not 4K in resolution, if you’ve looked for that. This is a slight disappointment, as we thought this laptop had it all. It only boasts Full HD 1920×1080 resolution, but that can be just enough for a clear, sharp picture. The thing that improves it all is that it now has 120 Hz refresh rate (laptops usually have 60Hz). That means that with Asus ROG Zephyrus you’ll have a super-fast response time in games. It is a really important feature when playing games such as shooter ones, where it can mean life or death situation.

Having heard those specs of Asus ROG Zephyrus, we run into a little bit of a problem. The battery life isn’t so great, offering about 1 and a half hour of gaming. The peripherals are certainly top-end, and power-hungry, so that’s justified, but it might disappoint you. If you want to use the full capacity,  you’d better be near a power outlet at all times. If you’re just an avid movie fan, it might hold on for a bit more, approximately 2 and a half hours, which is just enough to finish a movie.

For the price of Asus ROG Zephyrus – 2697$, you are probably hoping to push it to the limit. Asus understood the need, so they came up with an innovative design for cooling. When the laptop is opened, a portion of the bottom flexes to create 20% more open space for air circulation. You are also getting an AeroAccelerator technology, which improves airflow by 32% and reduces temperatures by 20% compared to conventional cooling.  You can set custom lights on the keyboard with any of 16 million colors available, to make it shiny and fun. In the package, you’re getting a set of stereo speakers built in. Asus ROG Zephyrus has a special technology integrated, to monitor and stop excess heat from damaging the sound clarity. 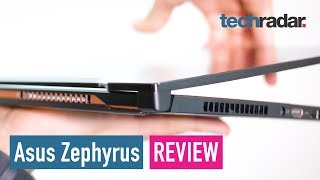 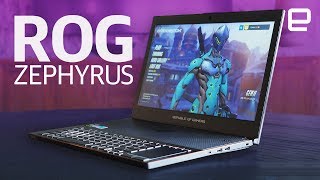