BeatsX by Dr. Dre is not what you’d expect. They’re not overpriced, a crazy-colored pair of headphones. In fact, they’re quite comfortable and fully water resistant. It’s true these usually have haters, but whether you love them or not, you gotta give them that. Moving on – They come in a couple colors, and will fit any outfit of your choice. To be honest, their main purpose is to fit in your ears good and not fall out easily. You can use them for jogging and running sessions easily, and even at the rocky terrain, you’re safe. That’s because they’re a neckband type of headphones.

What that means is – they’ll comfortably hang over your chest even if they manage to squeeze out of your ear canal. That’s a big worry and an issue on Apple AirPods, which are fully cable-free and wireless. Another difference is – the features of BeatsX are meant for more than iOS devices. Unfortunately, you might look a bit weird sometimes, as they bend near your collarbone. But if you’re ready to sacrifice a great look for function, you’re at the right place. Furthermore, the cable that goes on your neck (Flex-Form cable) has some cool technology.

It possesses two wires made of nickel-titanium alloy (nitinol), which is very durable and generally lightweight. Even better – it easily changes shape without damage and allows you to put it into a special box for easy carry. Remember how we mentioned the wireless feature (although not without wires completely)? It needs a battery to function, of course. The battery is cleverly positioned on the back, along with a bit of weight. It makes sure the headphones remain on the back and do not jiggle around when doing your favorite activity. While on the topic of battery – you might wonder how to charge them?

You’ll notice a Lightning port near very easily, and it’s just what you’ll use. Lightning to USB end can be plugged into a PC, or into an adapter to charge via a power outlet. Don’t let that fool you, though. BeatsX specs are meant to work with non-Apple devices easily, and that’s where the Bluetooth comes in. We’ll be honest – they sounded way better than we expected a wireless, Bluetooth headphones would. Both bass and treble were acceptable for us, and it entirely depends on your ear, and how deep you want to go.

But what more could you want for this price range? The price of BeatsX headphones is only about $110, which isn’t extremely cheap, but not overpriced either. Moving on, they’re not only a pair of headphones to listen to music while doing physical activity. They have a microphone integrated, and in our analysis, we had no problems making calls. Sound quality was clear enough, and everything worked flawlessly. Another feature that works in favor are the rubber additions that go into your ear. It makes them even more noise-canceling and helps you hear the other person. In the end, thanks to the Bluetooth chip made by Apple it’s very easy to use them. Just turn the headphones on, and keep them near your iPhone device like Apple iPhone 8 Plus, and let them do their magic. 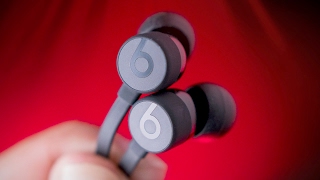 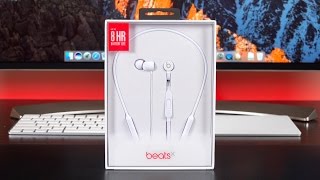