While BLU F91 isn’t the best smartphone you can get at $249, it isn’t the worst either. It’s actually a decent device whose strengths are its battery life, performance, and design. Speaking of battery life, the phone gets you around two days on average use. This is excellent and is undoubtedly the biggest highlight of the device. The gadget has a 5000 mAh Li-Po non-removable battery that supports 18W fast charging. Additionally, the phone supports 10W fast wireless and reverse charging. Many manufacturers often leave out wireless charging at this price.

It’s nice to see that BLU hasn’t followed that route. Overall performance is decent thanks to the use of MediaTek Dimensity 810 chipset. Mali-G57 MC2 GPU handles the gaming needs of the phone. On the software side, things are a bit different. This is because the phone runs Android 11 out of the box, at a time when most new phones ship with Android 12. Also, bloatware is present on this phone. Coming to the cameras, the phone’s camera performance is simply okay, and it could have been better. BLU F91 has a 48 MP wide-angle, 5 MP ultrawide, 2 MP macro, and 2 MP depth sensor camera on the back.

Selfies, on the other hand, are handled by the 16 MP camera. The phone has all the usual camera features like LED flash, HDR, and panorama. What’s surely not usual for phones of this budget, is that the phone can record videos up to 4K@30fps. Connectivity options include USB Type-C 2.0, USB On-The-Go, GPS, Bluetooth 5.1, NFC, FM Radio, Wi-Fi Direct, and a Hotspot. BLU F91 has a good design but scores especially big in the looks department. However, the phone only comes in Blue. It feels sturdy in hand and has a plastic back and frame. The phone weighs 209 grams, placing it among the heavier phones in its class.

As for the dimensions, it measures 6.64 by 3.02 by 0.35 inches. On the side, the phone has a fingerprint sensor. Other sensors include an accelerometer, gyro, proximity, and compass. Like performance, the phone’s display quality is decent. BLU F91 has a 6.8-inch FHD+ IPS LCD screen with a standard refresh of 60 Hz. The phone’s screen-to-body ratio and PPI density are 84.8% and 395 respectively. There are multiple criticisms to be made here. These are the lack of an AMOLED screen, 90 Hz refresh rate, and stereo speakers. Now, it’s not the only mid-range phone to lack all three, but it certainly puts in rare company, and not in a good way.

It has a loudspeaker and a headphone jack, though. The phone’s only variant has 8 GB of RAM and 128 GB of ROM. Memory is expandable using a memory card. Not many phones offer 8 GB of RAM at this price with such respectable specs. For this, BLU should be praised. The company deserves special praise for including a wired earbud in the box of the device. Besides an SD card, it can support two Nano-SIM cards and connections up to 5G. Now, it’s not fair to say that support for 5G is an advantage of BLU F91, as most phones in this budget support it. 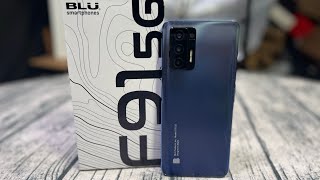 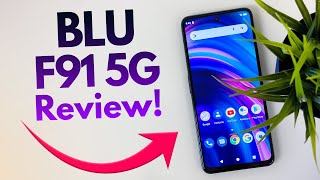