Google launched the Google Pixel 5a 5G on the 26th of August 2021. As the name suggests, it is a 5g phone that supports a Nano-SIM and an e-SIM. It is a successor to the Google Pixel 4a 5G that was released on the 5th of November 2020. The Google Pixel 5a 5G is powered by the Qualcomm SM7250 Snapdragon 765G 5G processor, which is based on the 7nm technology. The smartphone’s AnTuTu benchmark score is 320822. Coming to the smartphone’s dimensions, it measures 6.10 inches in height, 2.90 inches in width, and 0.30 inches in thickness. Coming to how heavy it is, it weighs 183 grams, which is relatively lighter than most phones of today, which weigh around 190 grams.

The device has a glass front that is protected by Gorilla Glass 3. Besides, it has an aluminum frame and an aluminum back. It has an IP67 certification for dust and water resistance for up to 1 m for 30 mins. The Google Pixel 5a 5G has a 6.34 inches FHD+ screen, with a resolution of 1080 x 2400 pixels and an aspect ratio of 20:9. The phone has an OLED panel and has a screen-to-body ratio of 85.0%. The device will not only run Android 11 out of the box but will also get Android OS updates and monthly security updates for 3 years. Looking at the specs, it’s safe to say that viewing videos on this phone will be a treat.

Also, seeing how it is a Google phone, OS updates are never an issue. The Adreno 620 supports the gaming experiences on this phone. The smartphone has 6 GB of RAM and 128 GB of internal storage, and the phone doesn’t come in any other configuration. Similarly, the phone only comes in black color, which Google calls Mostly Black. The phone is priced at $449. However, staying on the subject of storage, it’s worth mentioning here the phone lacks an SD card slot.

Coming to cameras, the phone has a 12.2 MP wide-angle camera and a 16 MP ultrawide camera on the rear. Camera features include LED flash, Pixel Shift, and Auto-HDR. With the rear camera setup, you could record not just 1080p, but also 4K videos. On the front, the phone has an 8 MP camera, which also has Auto-HDR. However, you can only record 1080p videos with the front camera. The Google Pixel phones are known for their camera performance, and the Google Pixel 5a delivers in that department.

The phone has stereo speakers, two microphones, and noise suppression. Besides, the smartphone has M3/T4 HAC Rating for hearing aid compatibility. While the device doesn’t support radio, it does support NFC, Bluetooth 5.0, dual-band Wi-Fi, Wi-Fi Direct, Hotspot, and GPS. Coming to sensors, the Google Pixel 5a 5g has an accelerometer, gyro, proximity, compass, barometer, and a rear-mounted fingerprint sensor. 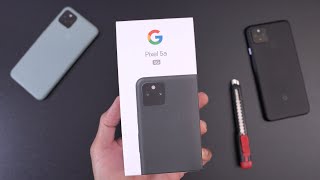 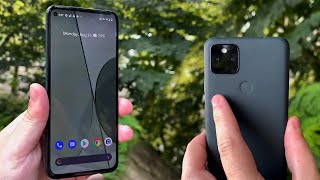