We have to be honest with you and ourselves, the tablet called Google Pixel C has it all. First and foremost, it’s coming from the tech giant, Google themselves. If anyone knows what people search for and desire deep inside, it’s them. That’s why they decided to give us an option to fulfill it all, and the solution is exactly this – Google Pixel C. It certainly has an awesome 10.2-inch display that’s bright, and it looks beautiful. The problem could be the price of Google Pixel C – $789, but also the competition, the iPad itself from Apple. Come with us and delve deeper into what makes it stand out:

Like we already mentioned, the specs of Google Pixel C are a thing of the future. Even though it was the first try for Google, they nailed it right in the head. The screen we already mentioned, size is 10.2 inches. But what we didn’t is the resolution. You’ll be happy to hear that Google Pixel C sports a 2560 x 1800 display that makes the colors stand out and feel alive. But that isn’t all – the whole build is made to be resistant, beautiful and best of all – mobile. It went out of the bounds of a smartphone for sure, and it shines brightly.

Okay, before we talk about tech stuff, let’s explain the features you can see at a first glance. The silver aluminum is shiny and looks expensive and light. In reality, it was a bit heavier than we imagined, at about 520g. Now that isn’t a thing to be scared of, we’re just letting you know. Next up – there’s no fingerprint scanner to unlock the phone, even though Google is capable of that. A bit of a weird decision, but you can live without it. We’ll just mention the camera shortly, as it’s a means to an end and you’re better off using your phone anyway.

The camera on the back of Google Pixel C is an 8MP resolution one. You’ll be taking pictures of exam papers or important documents anyways. It’s important to realize that in those cases, the camera is extremely viable and works great.  Remember how Apple users like to brag about Apple’s logo on the back? Google did the same with Google Pixel C. You have an iconic Chromebook lightbar on the back, near the camera. It will glow in the dark, and show people just how proud of your tablet you are.

To wrap up, we have to mention a bit of a controversy with Google Pixel C. Even though you want your tablet to be mobile and light, to use it to its fullest you’ll need an additional keyboard. That keyboard doesn’t come free or even cheap, but it’s included in the package we provided below the specs of Google Pixel C. In the end, you must realize that there’s no microSD card slot. Although you can get a model with 64GB of internal memory, which should be enough. Even with the keyboard in the package, this one is still cheaper than the competition, and we recommend getting your hands on one if you can. 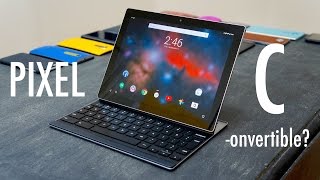 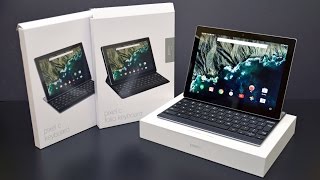