Honor 50 Lite is a good option if you are mainly concerned with the design, battery life, and display. However, it isn’t the kind of all-around package that top-selling phones of this segment are. It was first announced on the 25th of October 2021 and released the following month on the 17th of November. The phone’s biggest strength is undoubtedly its battery life, which is around two days on moderate use. While the phone’s 4300 mAh battery does fall on the smaller side by today’s standards, the battery backup more than makes up for it. What’s just as impressive is that the phone supports 66W fast charging.

As per the ads, the phone can go from 0 to 40% of charge in just 10 minutes. The phone comes in Midnight Black, Space Silver, and Deep Sea Blue, and it looks stunning by all means. While the phone’s back is made of plastic, it doesn’t pick up a lot of fingerprints, which is a great thing. Honor 50 Lite can not only be operated with a single hand but also has a manageable weight. To be precise, the phone measures 6.37 by 2.94 by 0.33 inches and measures 192 grams. The device has a 6.67-inch FHD+ IPS LCD screen with a PPI density of 391 and an amazing screen-to-body ratio of 89.5%.

The display quality is superb, and the multimedia experience could have been the same if there were stereo speakers. Honor 50 Lite has a loudspeaker, though. The presence of a 3.5 mm headphone jack is appreciated since it’s no longer as common as it once was. Coming to the cameras, the phone has a 64 MP wide-angle, 8 MP ultrawide, 2 MP macro, and 2 MP depth sensor camera on the back. Its main camera performs well, even in low-lighting conditions. The other cameras don’t quite measure up. For selfies, the phone has a 16 MP wide-angle front camera that can produce acceptable shots.

It has all the usual camera features and can record 1080p videos. On the subject of sensors, the device has a side-mounted fingerprint sensor, accelerometer, gyro, proximity, and compass. Honor 50 Lite supports dual-band Wi-Fi, Hotspot, Bluetooth 5.0, GPS, and USB Type-C 2.0. As expected, the phone has NFC but lacks FM Radio. The Qualcomm Snapdragon 662 processor delivers adequate performance, but you can easily get much better-performing phones at similar prices. Performance is one aspect where the phone greatly falls behind the competition.

The Adreno 610 GPU handles the phone’s gaming requirements. Coming to the software, the device runs Android 11 and Magic UI 4.2 on top. It supports Google Play Store services as well. The phone comes in at a starting price of $250 and has two variants. Both have 128 GB of internal storage, with 6 GB and 8 GB of RAM. The device neither supports an SD card nor 5G connectivity. What Honor 50 Lite supports are two Nano-SIM cards and connections from 2G to 4G. 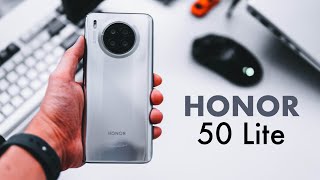 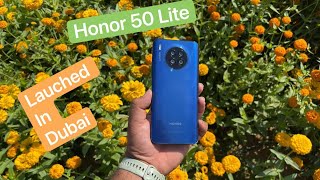