Honor Magic 4 Pro was first launched on the 9th of April 2022 and is one of the finest phones in the flagship segment. It has some minor issues, but for the most part, customers will be pleased. The huge camera module gives the impression that the phone’s camera will be superb, which is true. However, the portrait shoots look substandard. On the rear, the phone has a quad-camera setup of a 50 MP wide-angle camera, 50 MP ultrawide camera, 64 MP periscope telephoto camera with OIS and 3.5x optical zoom, and a TOF 3D depth sensor camera. It has a 12 MP ultrawide camera and TOF 3D depth/biometrics sensor camera on the front.

Besides the usual camera features, the phone has gyro-EIS, HDR10, and 10-bit video. Speaking of video, Honor Magic 4 Pro can record videos up to 4K. Apart from the usual sensors, the phone has an under-display fingerprint sensor, Face ID, and color spectrum. The phone’s battery life is decent, as it can get you over the day on average use. Given the fact that it comes in at a starting price of about €1100 (roughly $1181), it could have been better. It has a 4600 mAh Li-Po non-removable battery that supports both 100W fast wired and wireless charging. This is tremendous, but there’s a catch.

You don’t get a wireless charger, and the supplied 100W charger only supplies 80W to the wireless charging stand. Therefore, if you want to charge the device wirelessly at 100W, you’ll have to buy the official 135W charging brick and wireless charger separately. Coming to the design, the phone has a glass back with a metal frame. It is comfortable to hold thanks to the curved edges, but it’s not meant to be used with a single hand. The gadget measures 163.6 x 74.7 x 9.2 mm and weighs 215 grams. The device not only has IP68 certification for dust/water resistance but is also protected by Aluminosilicate glass on the front.

You shouldn’t have any issues with its build quality, as it’s sturdy. It’s worth mentioning here it picks up fingerprints and dust easily. For colors, the options are Black, White, Cyan, Gold, and Orange. The phone’s display quality is easily among the best in 2022. Honor Magic 4 Pro has a 6.81-inch FHD+ LTPO OLED screen with a refresh rate of 120 Hz. While the phone’s peak brightness of 1000 nits isn’t the best you can get in the segment, you will still have no issue using the phone outdoors. The phone has a PPI density of 460 and an extremely rare screen-to-body ratio of 93%.

In the sound department, the phone has stereo speakers, which certainly adds to the experience. The chipset and GPU used here are Qualcomm SM8450 Snapdragon 8 Gen 1 and Adreno 730 respectively. Both of them deliver outstanding performances in their respective departments. Honor Magic 4 Pro runs Android 12 out-of-the-box with Magic UI 6 on top. It supports Google Play Services which is nice to see. The gadget does have bloatware but you can uninstall those.

Honor Magic 4 Pro will only get major OS updates for 2 years, which is a major con of this device. The phone comes in three RAM/ROM combinations which are 8 GB/ 256 GB, 12 GB/ 256 GB, and 12 GB/ 512 GB. Storage isn’t expandable, but the phone can handle two Nano-SIM cards and connections up to 5G. For communication, the phone supports USB Type-C 3.1, USB On-The-Go, NFC, Infrared Port, Bluetooth 5.2, dual-band Wi-Fi, and a Hotspot. 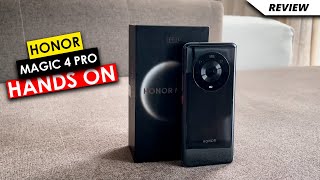 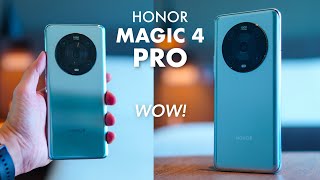