Honor Magic V is one of those few phones that competes with the best flagship phones out there. This is something that can’t be said about every foldable phone, and for that, Honor deserves its fair share of the credit. At a starting price of €1400 (roughly $1461), it’s safe to say that the phone is super expensive. Shockingly, pricing isn’t its biggest issue, availability is since you can only officially purchase it in China. The other notable issues with this phone are the absence of a telephoto lens and OIS. Yet, the phone’s performance is great.

However, it can’t be denied that you can get similarly priced phones that deliver better camera performance. The phone has two 50 MP wide-angle and a 50 MP ultrawide camera on the rear. Selfie duties, on the other hand, are handled by the 42 MP wide-angle camera. While it does miss out on OIS, its features include Dual-LED dual-tone flash, gyro-EIS, and HDR10+. Honor Magic V is well-built, which plays a huge factor in the success of a foldable phone. It doesn’t have any gap while closed, which is a major plus. However, the hinge feels a little less when compared to a few other similar phones.

It has an aluminum frame with and glass front. The back panel could be of glass or eco-leather, depending on which variant you go for. For colors, the options are Titanium Silver, Black, and Burnt Orange. It weighs 293 grams, but if you opt for the leather variant, the weight would be 288 grams. Honor Magic V measures 160.4 by 72.7 by 14.3 mm when folded and 160.4 by 141.1 by 6.7 mm when not. Its display quality is awesome. The phone has a 7.9-inch FHD+ foldable OLED screen with a 90 Hz refresh rate and support for HDR10+. Its screen-to-body ratio and PPI density are 88.6% and 381 respectively.

It also has a 6.45-inch FHD+ OLED cover display screen with a 120 Hz refresh rate. In this case, the PPI density is 431, while support for HDR10+ is also present. Moving to the sound department, the device has stereo speakers but misses out on a headphone jack. This isn’t really a surprise though, as most premium phones omit it. Multitasking on Honor Magic V is expectedly great. Similarly, the phone delivers buttery smooth performance, thanks to the Qualcomm Snapdragon 8 Gen 1 chipset. Gaming requirements are handled by the Adreno 730 GPU. On the software front, the phone runs Android 12 out-of-the-box with Magic UI 6 on top.

As for the sensors, the phone has an accelerometer, gyro, proximity, compass, and a side-mounted fingerprint sensor. At this price, the phone should have included an in-display fingerprint sensor. When it comes to battery life, the phone has once again met expectations. Honor Magic V has a 4750 mAh Li-Po non-removable battery that gets you around 1.5 days, on average use. It supports 66W fast charging, which is incredibly impressive. The phone comes in two RAM/ROM combinations, which are 12 GB/256 GB and 12 GB/512 GB. It doesn’t support an SD card, so make sure you choose the right variant. On the plus side, it can support two Nano-SIM cards and connections from 2G to 5G. 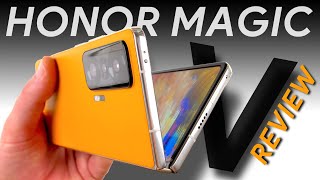 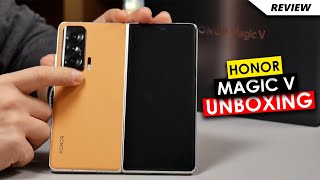