At a starting price of about €240 (roughly $256), Honor X9 5G is one of the best mid-range phones when it comes to battery life. It has a 4800 mAh Li-Po non-removable battery that can last around two days on average use. This is absolutely superb. What’s also a major advantage of owning this phone is its support for 66W charging. The device can go from 0 to 81% of charge in 30 minutes, as per the ads. It is also one of the better phones in its segment. For communication, it supports USB Type-C 2.0, USB On-The-Go, GPS, Bluetooth 5.1, dual-band Wi-Fi, and a Hotspot. Like most mid-range phones, it has NFC but no FM Radio.

Much like its battery life, its design is impressive. While the phone does have a plastic back and frame, it looks premium. Not only that, it is sturdy, slim, and lightweight. For reference, the device measures 189 grams and measures 6.54 by 2.98 by 0.32 inches. While the phone is comfortable to hold, the back panel is slippery and easily picks up fingerprints. Use Honor X9 5G with a case on to avoid that. For colors, the options are Titanium Silver, Ocean Blue, and Midnight Black. In terms of storage configurations, the phone has two variants.

Both variants have 8 GB of RAM but differ in terms of ROM provided (128 GB and 256 GB). Honor X9 5G lacks an SD card, which isn’t a surprise, since most mid-range devices follow the same route. On the bright side, the phone can handle two Nano-SIM cards and connections up to 5G. When it comes to sensors, the phone has an accelerometer, gyro, compass, virtual proximity sensor, and a side-mounted fingerprint sensor. The phone’s display quality is decent, but you will have to look for shade outdoors on a bright day. It has a 6.81-inch FHD+ IPS LCD screen with a refresh rate of 120 Hz.

Its PPI density is 385 while the screen-to-body ratio stands at an impressive 89.2%. While the rival phones do offer AMOLED screens, they mostly come with a refresh rate of 90 Hz. The absence of stereo speakers and the weak speaker performance do hurt the multimedia experience. Also, there’s no headphone jack to be found here. Honor X9 5G delivers smooth overall performance thanks to the Qualcomm Snapdragon 695 5G chipset. Gaming requirements are handled by the Adreno 619 GPU. On the software end, the device runs Android 11 with Magic UI 4.2 on top.

This is disappointing to see since the phone was released on the 29th of March 2022. As for the cameras, the phone’s overall performance is average, but the selfie camera does impress in proper lighting. Honor X9 5G has a 48 MP wide-angle, 2 MP macro, and 2 MP depth sensor camera on the back. Selfies are handled by the 16 MP camera. It has camera features such as LED flash, panorama, and HDR and can record videos in 1080p@30fps. 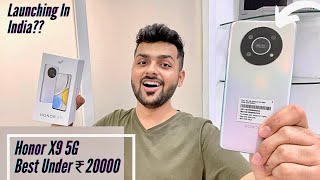 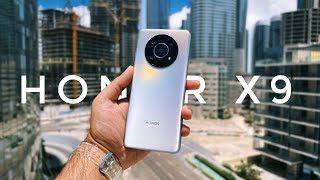