So… HP x4500. It’s a mouse with some sharp edges and curves at a first glance. But once you got your hands on it (pun intended), you just can’t let go! All those slopes on the side along with a huge thumb rest will offer you so much comfort. And not for a huge amount of money, because it’s very affordable and brings quite a few things to the table. Now, there are some cheaper alternatives, we’ll be honest with you, but it will be up to you to decide once you’ve heard of everything it has to offer.

Let’s not waste more time – here are HP x4500 spec. First of all, there are 3 buttons only, which isn’t bad, but some competitors offer up to 7 buttons for a similar price. An example of that would be Logitech Wireless Mouse M510. But those 3 buttons make it a very simple-to-use mouse, and a great choice if you’re traveling somewhere. Of course, it’s wireless, and with an easy plug into your USB port, it will work on most surfaces. Plus – no cables makes it easy to pack and unpack, and they won’t get tangled whatever you do.

Next up, and we’d feel guilty if we didn’t point it out – HP offers a similar mouse. That one is HP x7000 Touch for nearly the same price with a bit more buttons you can program to your liking. Back to the topic – you won’t require any drivers to be installed in order to work. It’s just plug-and-play, making it a perfect gift for persons that aren’t proficient in technology. Compatibility is just great as well. It worked on all Windows versions, Mac OS x and Google Chromebook without any problems. When talking about compatibility, it’s important to mention the surfaces it’ll work on.

In our analysis, features of HP x4500, its laser to be precise, worked on both wooden surfaces, kitchen counters, shelves and more. It has some problems with uneven textures, and it doesn’t work on the glass. But it’s just what you would’ve expected for this price range and the laser technology. If you were looking for one to use on virtually any surface, our recommendation would be Logitech MX Master. We’re coming to the main power source, and those, of course, are batteries. In fact, we’re talking about two AA batteries that, by HP promises, can hold it for about two and a half years!

We aren’t sure if that’s the case, and maybe you could tell us? It’s not exactly an insane claim, knowing this is a basic mouse for all your needs. You will turn it off when not in use, right? One last thing before we wrap this up – it’s made for right-handed people in mind. Another slight discrimination against lefties, but it’s just what it is. Luckily, Microsoft has a solution in form of a Microsoft Wedge Touch Mouse, which can be used with both hands, and fits comfortably. In the end, if you’re looking to use a mouse for a prolonged period of time a day, this might be the most comfortable solution for you. 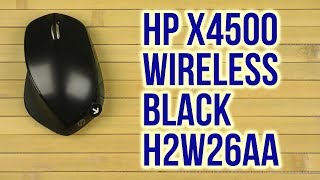