Huawei Honor 7Xcame as a surprise near the end of 2017, in December to be precise. With so many Huawei smartphones on the market, it might be hard to remember which series is which exactly. This one isn’t exactly a competitor to Apple’s iPhone X or Samsung S8 or Samsung S8+, as those have a price and specs on a whole another level. We would say Huawei Honor 7X is more in range with Motorola Moto X4, only a bit better in some aspects. The time has come for us to tell you more about Huawei Honor 7X specs, and help you make an easy decision:

This one is truly a beauty of a smartphone. It comes in 4 completely different colors, black, blue, gold and red. We’ve seen the blue on first, and it really took our breath away. Not only is it slick and slim, but the body is made of aluminum, so it’s fairly light – 165g. The front side is made of glass, of course, along with some protections in form of Corning Gorilla Glass. Another great thing that sets Huawei Honor 7X apart is the EMUI 5.1 user interface. It gives a quite good interface change when compared to the default, stock Android.

We’ll have to mention the screen size and resolution next. Huawei Honor 7X boasts a 5.93-inch screen, which is one of the biggest on today’s market. Not only will the screen be big, it’ll be sharp and bright as well, thanks to the IPS LCD panel we’ve already fallen in love with. Resolution is 1080 x 2160 pixels, which means the ratio is 18:9, a bit unconventional, but pleasant for the eye nonetheless. The system that Huawei Honor 7X ships with is Android 7.0 (Nougat) for the classic-look lovers. In case you’re feeling adventurous, give EMUI 5.1 a try, like we previously mentioned.

Now let’s flip the phone, and see what your eye goes straight to. Those would be the dual cameras on the back, with 16 MP of resolution. We won’t really have to convince you to choose the phone based on the camera itself. Those are already used on all current flagships and produce great results.  You have an 8 MP camera on the front for all your needs, allowing you to keep the selfie game up. The video, unfortunately, isn’t 4K, but what did you expect for a price of Huawei Honor 7X – about $300. You’ll still get to brag about 1080p video recording but with only 30 frames per second.

In the end, a good look under the hood. The chipset is as you already guessed, Huawei’s own HiSilicon Kirin 659. A CPU is great for this price range as well, an Octa-core Octa-core (4×2.36 GHz Cortex-A53 & 4×1.7 GHz Cortex-A53), which we already had a chance to see in action on other phones. To render graphics properly and swiftly, you can certainly trust Mali-T830 MP2 GPU inside. Last, but not least, you’ll get to choose between 3GB and 4GB of RAM. To be honest, this isn’t a significant difference, you won’t make a mistake whichever you choose. 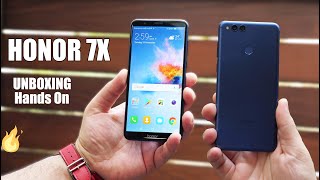