Huawei Nova 9 SE deserves your consideration if you are concerned with display quality, cameras, design, and battery life. However, it doesn’t support Google Play Services, which is a major drawback. On the positive side of things, you can download Android apps from the Huawei AppGallery store. It runs Android 11 with EMUI 12 on top. The Qualcomm SM6225 Snapdragon 680 4G delivers decent overall performance while the Adreno 610 GPU manages the phone’s gaming requirements. In the AnTuTu benchmark test, the phone has a score of 248663 points. The phone has a 6.78-inch FHD+ IPS LCD screen with a refresh rate of 90 Hz. It has a PPI density of 387 and a screen-to-body ratio of 89.5% too, which is praiseworthy.

In the sound department, the device has a loudspeaker but lacks a 3.5 mm headphone jack. While the display quality and multimedia experience are decent, it would have been better if the company provided stereo speakers and an AMOLED screen. The phone weighs 191 grams and measures 6.48 by 2.98 by 0.31 inches. It is pretty lightweight, but it certainly isn’t easy to use with a single hand. The gadget feels sturdy despite having a polycarbonate frame. As far as looks are concerned, it is stunning. It is easily among the better-looking phones you can buy today. For colors, you get to choose between Midnight Black, Pearl White, and Crystal Blue.

Huawei Nova 9 SE has all the usual sensors. Coming to cameras, the overall performance is good. The 108 MP wide-angle primary camera is undoubtedly the star of the show. In fact, it does well in low lighting conditions too. In addition to the 108 MP wide-angle camera, the phone has an 8 MP ultrawide, 2 MP macro, and depth sensor camera on the rear. It also features a 16 MP wide-angle camera on the front for selfies and video calls. The phone’s camera features include LED flash, gyro-EIS, panorama, and HDR. Video recording is limited up to 1080p.

In the communication department, the device has dual-band Wi-Fi, Wi-Fi Direct, Hotspot, Bluetooth 5.0, GPS, USB Type-C 2.0, and USB On-The-Go. You won’t be able to listen to FM Radio on Huawei Nova 9 SE, but it’s got support for NFC. This isn’t shocking by any means, as most mid-range phones omit FM Radio. The phone has a Li-Po 4000 mAh non-removable battery that should get you over the day on average use. Considering the size of the battery, the battery backup is great.

However, you can easily find phones with a bigger battery and better backup at this price. It supports 66W fast charging which should get the phone from 0 to 75% of charge in just 20 minutes. This is a huge advantage of owning Huawei Nova 9 SE. Speaking of price, the phone comes at a starting price of $509. It has two variants. Both variants have 8 GB of RAM with 128 GB and 256 GB of internal storage. The phone can support an SD card and has a hybrid slot. Besides an SD card, the phone can support up to two Nano-SIM cards and connections from 2G to 4G. The lack of 5G connectivity is also a disadvantage of having Huawei Nova 9 SE. 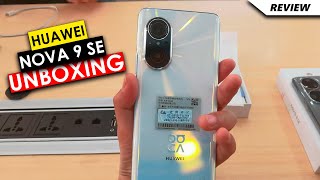 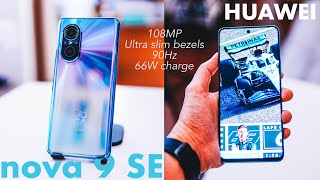