Huawei Y7 Prime is an entry-level smartphone from Huawei, released in June 2017. It differentiates from its relatives like Honor 9 and Nova 2 Plus, but in some way, it’s pretty similar. What we’re talking about is the design that feels premium and more expensive than it is. But also the screen size, 5.5-inches, although less sharpness, but we’ll talk about that in just a minute. Another thing that makes it unique is the lack of Huawei’s own Kirin processor because there’s a Qualcomm Snapdragon inside. it’s time we’ve delved into all of Huawei Y7 Prime specs.

Like we already mentioned, you’ll find an Octa-Core processor based on Qualcomm Snapdragon 435 architecture. Not incredibly powerful, but powerful enough if you don’t push it to its limits. In combination with that is a mid-range or even low at this moment in time, Adreno 505. That doesn’t mean it’s a bad GPU, but it’s getting old as the time goes. You’ll also find 3GB of RAM, which is just enough for you if you aren’t looking to pay way, way more money for a phone like Razer Phone. Included in the package is 32GB of internal memory as well, which should satisfy basic needs.

In case you need more, microSD card is available, of course, although there’s no separate slot for it. When talking about the screen, and we already mentioned this, it’s 5.5-inches in diameter, which is solid, But what possibly isn’t – no full HD resolution, only 1280 x 720 pixels. We’ve kinda expected that for this price, but it still disappointed us a bit. But you’re still getting 320 dpi of sharpness, which is enough and not blurry in any case. Before we go on to the camera, it’s time we mentioned the cost of a beauty like this. The price circles between 250 and 300$, which can be quite high, depending on how you look at it.

That’s because Xiaomi offers Xiaomi Mi A1 for that price, and it comes equipped with a full HD resolution and some other features. But back to this one, its camera is 12MP on the back, and it comes with a classic LED flash. Although the interface is very easy to use, it has some features we love. Beauty mode, Night shot, Manual setting mode and scanning documents are just some of those. The focus is very fast and responsive, and pictures have sharp details. We were pleasantly surprised with Huawei Y7 Prime camera, and it really gives you bang for your buck.

The front camera is 8MP and it doesn’t come with a flash to help in low light conditions. But that isn’t unexpected, and its beauty mode for sharpness, softness, and brightness saves the day. It will improve your pictures considerably, just don’t overdo it. Who wants to look at a smudge of a person, plus it looks fake. The battery is one of the best Huawei Y7 Prime features and the main selling point. We’re talking 4000 mAh Li-Ion, which is considerably bigger than the competitors. Paired with Android 7.1 (Nougat) and a lower-resolution screen, it will last you quite a while. 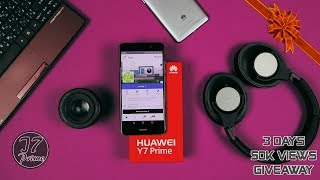