Infinix Hot 12 Play is a solid option in the budget segment. This is evident when you look at its specs, performance, and price. It comes in at a starting price of about €100 (approximately $105). However, the starting statement only holds if camera performance is at the bottom of your priority list. On the topic, it should be mentioned that the device delivers poor camera performance. Yes, that’s after because it is a budget phone. On the back, it has a 13 MP wide-angle and QVGA camera. Up front, there is an 8 MP selfie camera.

It can record videos up to 1080p@30fps, and it has features like Dual and Quad-LED flash, which aren’t very common at this price point. Infinix Hot 12 Play has a design that looks like most budget phones. It’s not a bad thing, but it isn’t great either. The phone is average as far as looks are concerned, and it comes in Racing Black, Legend White, Origin Blue, and Lucky Green. However, the phone is well-built. It has a plastic frame, gradient finish plastic back, and a glass front. On the back, the device has a rear-mounted fingerprint sensor. Other sensors include an accelerometer, proximity, and compass.

The phone measures 6.71 by 3.06 by 0.33 inches and weighs 195 grams. This is impressive since the device has a massive 6000 mAh Li-Po non-removable battery. With average use, expect it to last for two days without needing a charge again. When it does run out of charge, it’s going to take a considerable time to fill up again, as it lacks fast charging. This is another major con of Infinix Hot 12 Play. Thankfully, the phone has USB Type-C 2.0. Additionally, it supports FM Radio, dual-band Wi-Fi, GPS, Bluetooth, and a Hotspot.

Infinix Hot 12 Play has a 6.82-inch HD+ IPS LCD screen with a refresh rate of 90 Hz. While it would have been nice to see an FHD+screen, Infinix deserves props for including a 90 Hz refresh rate at this price. The phone’s PPI density and screen-to-body ratio are 259 and 84.5% respectively. With 480 nits of brightness, you shouldn’t have issues viewing content on this phone in most lighting conditions. Considering the price, the phone’s display quality is decent. In the audio department, the phone has a loudspeaker and a headphone jack. It lacks stereo speakers, but at this price, no one was expecting this either way.

Overall performance is smooth as long as you’re limited to casual day-to-day tasks. Expectedly, it’s not meant for heavy tasks like gaming. The chipset and GPU used are Unisoc T610 processor and Mali G52 GPU respectively. Moving to the software side, the device runs Android 12 out-of-the-box with XOS 10 on top. Most Infinix phones ship with tons of bloatware. Sadly, Infinix Hot 12 Play is merely another example. The phone comes in two RAM/ROM combinations, which are 4 GB/64 GB and 6 GB/128 GB. The phone also has an option to increase by up to 3 GB virtually. It supports an SD card, two Nano-SIM cards, and connections up to 4G. 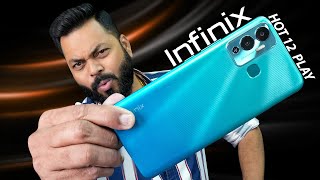 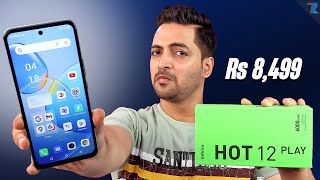