Infinix is a company that has been doing some great work as of late, especially in the budget smartphone category, and Infinix Note 11 is another such example. The device was announced on the 3rd of November 2021 and released more than a month later on the 8th of December 2021. This smartphone comes at a very aggressive starting price of about €100, or approximately $113. It is available in three variants. The first two have 4 GB of RAM with 64 GB and 128 GB of internal storage, respectively. The more expensive variant has 6 GB of RAM with 128 GB of internal storage.

The memory can be expanded via an SD card as the device has a triple card slot. Besides an SD card, the phone can support two Nano-SIM cards and connections from 2G to 4G. For color, there are three options, Celestial Snow, Glacier Green, and Graphite Black. The build quality is good as it has Gorilla Glass 3 protection on the front, and feels sturdy in hand despite its plastic build. The phone weighs just 184 grams, for which the company deserves a lot of credit. Coming to the dimensions, the Infinix Note 11 measures 6.47, 3.02, and 0.31 inches in height, width, and thickness respectively.

The display quality of the phone is amazing as it has a 6.7-inch FHD+ AMOLED screen. What also helps is that the phone has a screen-to-body ratio of 86% and a PPI density of 393. It’s also worth mentioning here that Infinix Note 11 does great in the sound department. The phone not only has a 3.5 mm headphone jack but stereo speakers as well, which is rarely found in budget phones. On the software side, the device Android 11 with the android skin being XOS 10. The User Interface is smooth, but the device has ads and bloatware. This is perhaps the biggest con of owning this device.

The MediaTek Helio G88 processor delivers a fine overall performance, which is expected. On the other hand, the gaming performance is handled by the Mali-G52 MC2 GPU. While you wouldn’t have trouble gaming on this phone, it should be mentioned that the phone only has a screen refresh rate of 60 Hz. For sensors, the phone has an accelerometer, gyro, proximity, compass, and a side-mounted fingerprint sensor. In the communication department, the phone has dual-band Wi-Fi, Hotspot, Wi-Fi, Direct, Hotspot, Bluetooth, GPS, USB Type-C 2.0, and USB On-The-Go.

The device also has FM Radio and support for NFC, which is also rarely found in budget devices. Post full charge, the phone should get you through one and a half days, on average use. The phone has a 5000 mAh lithium polymer non-removable battery that supports 33W fast charging. At this price point, not many phones offer fast charging at that level. Therefore, this is a major advantage of owning the Infinix Note 11 smart device. On the flip side, a huge drawback of owning this phone is its average camera performance.

The Infinix Note 11 has a triple camera setup on the back. It has a 50 MP wide-angle and a 2 MP depth sensor camera, besides a QVGA AI camera. The phone’s camera features include Quad-LED flash, HDR, and panorama. On the front, the device features a 16 MP camera for selfies and video communication. As for video recording, the phone can do so in 1080p and 1440p at 30fps. 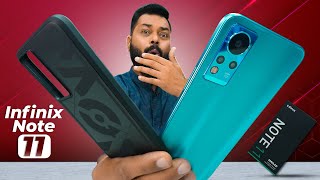 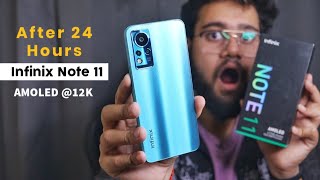