Infinix Smart 6 is a good option if you are mainly concerned with display quality and battery life. At a price of about €100 (roughly $107), it’s safe to say that affordability is its biggest strength. On the flip side, its biggest issue is performance. The Unisoc SC9863A chipset, which is based on the 28 nm manufacturing process, delivers below-average performance. Needless to say, you will have to deal with lags if you choose to purchase this phone. Therefore, it’s best to use the phone for the most basic of tasks. The gaming experience delivered by the IMG8322 GPU, as you might have expected, is even worse.

On the software end, the device runs Android 11 Go edition out of the box with XOS 7.6 on top. While budget phones are often low on bloatware, that’s not the case here. This is disappointing and is another huge con of owning Infinix Smart 6. The phone comes in a single configuration of 2 GB RAM and 32 GB ROM, which is a contributor to slow performance. eMMC 5.1 storage doesn’t help matters either. The phone has a triple card slot that can accommodate an SD card and two Nano-SIM cards. It can support connections up to 4G. Coming to cameras, the phone has a dual-camera setup on the back.

Infinix Smart 6 has an 8 MP camera and 0.8 depth sensor camera. For selfies, the smartphone has a 5 MP camera. Camera features include Dual-LED flash, while video recording is allowed up to 1080p. Considering the price, the phone’s camera performance is acceptable. Camera sensors include an accelerometer, proximity, and a rear-mounted fingerprint sensor. Budget phones are often praised for their battery life, and thankfully, the same is the case with this one. In fact, it has exceeded the expectations since the phone has a 5000 mAh Li-Po non-removable battery.

It lasts around 2 days on average use and if you are a light user, the results will only be better. Sadly, it doesn’t support fast charging. For communication, the phone supports Wi-Fi, Hotspot, Bluetooth, GPS, Bluetooth, FM Radio, microUSB 2.0, and USB On-The-Go. It would have been nice if the phone supported USB-Type C, though. The phone’s build quality is on par with the other phones in its segment. It has a glass front with a plastic frame. Fingerprints and smudges are often found on its plastic back panel due to its glossy finish. Infinix Smart 6 has an average weight of 195 grams and measures 165.5 by 76.4 by 8.8 mm.

For color, the options are Purple, Ocean Blue, Light Sea Green, and Polar Black. Considering the price, the phone has an awesome display quality. It has a 6.6-inch HD+ IPS LCD screen with an aspect ratio of 20:9. While the PPI density is 266, the screen-to-body ratio stands at an impressive 89%. The phone can go up to 500 nits of brightness which works fine in most lighting conditions. However, you may need to look for shade on a very bright day when you’re outdoors. In the sound department, Infinix Smart 6 has a loudspeaker and a headphone jack. 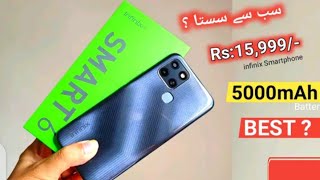 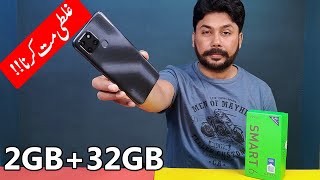