Infinix Zero X Neo was first announced on the 13th of September 2021 and released on the 2nd of October 2021. The phone is priced around $249, and it comes in Nebula Black, Starry Silver, and Bahamas Blue. The back panel is very glossy, which may or may not impress everyone, but it’s surely worth mentioning here. As you would expect, the Infinix Zero X Neo smartphone does attract fingerprints. The phone has 8 GB of RAM and 128 GB of internal storage. The memory type used here is UFS 2.2 and the device has a dedicated card slot.

Infinix Zero X Neo is a great option for those looking for a phone with strong battery life. The phone has a 5000 mAh lithium polymer non-removable battery with support for 18W fast charging. While you could argue that it would have been better if the phone came with faster-charging capabilities, the battery life more than makes up for it. If you are an average user, the phone should last you for close to two days. In case you are a light user, you can obviously expect it to last even further.

Besides an SD card, the device can support two Nano-SIM cards and connections from 2G to 4G. The lack of 5G is a downside since you can get 5G phones at this price. The Infinix Zero X Neo feels strong and durable despite its plastic body. Coming to the dimensions, it measures 6.63, 3.01, and 0.35 inches in height, width, and thickness. The device is pretty manageable at 193 grams. The smartphone has a 6.78-inch FHD+ IPS LCD screen and a screen-to-body ratio of 84.7%. In addition, the phone has an impressive PPI density of 396.

On the software side of things, the smartphone runs Android 11 with XOS 7.6 on top. Therefore, you will have to deal with bloatware. The overall performance delivered by the MediaTek Helio G95 is quite good, The device not only has a 3.5 mm headphone jack but dual speakers as well. The Mali-G76 MC4 GPU, on the other hand, looks after the phone’s gaming requirements. The 90 Hz screen refresh rate only adds to the experience. As for the sensors, the device has an accelerometer, gyro, proximity, compass, and a side-mounted fingerprint sensor.

In the communication department, the phone has Wi-Fi dual-band, Bluetooth, GPS, Wi-Fi Direct, hotspot, USB Type-C 2.0, and USB On-The-Go. Infinix Zero X Neo has FM Radio, but there’s no support for NFC. On the topic of the camera, the phone’s performance is a mixed bag. On the back, the phone has a 48 MP wide-angle camera, 8 MP periscope telephoto camera with OIS, and 5x optical zoom, besides the 2 MP depth sensor camera. The main camera takes decent shots, while the telephoto camera is awesome.

The phone’s camera features include Quad-LED flash, HDR, panorama. On the front, the Infinix Zero X Neo has a 16 MP wide-angle camera for selfies and video communication. The rear camera set-up can record videos in 4K and 1080p, while the front camera can only record in the latter. 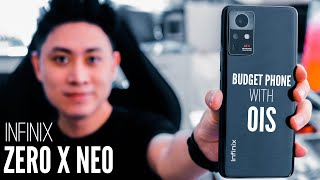 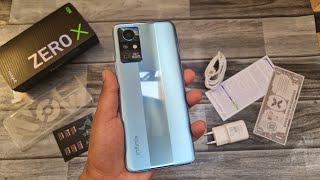