Infinix’s 2021 flagship phone, Infinix Zero X Pro, was announced on the 13th of September and released four days later on the 17th. Being a flagship phone, it delivers a great experience but at a price of about €390, which approximately converts to $451. Its relatively affordable price is one of the major advantages of owning this device. The other advantage of having this device is that it comes with headphones. This is quite rare to see in today’s times. For color, there are three options: Nebula Black, Starry Silver, and Tuscany Brown. The phone comes in two configurations. Both variants have 8 GB of RAM but differ in terms of internal storage offered (128 GB and 256 GB).

The phone has room for two Nano-SIM and supports connectivity from 2G to 4G. The device has a dedicated SD card slot, which isn’t usually found in flagship phones. MediaTek Helio G95 processor, which is based on the 12 nm fabrication process, handles the overall performance of the phone. The gaming performance, on the other hand, is handled by the Mali-G76 MC4 GPU, which is further supported by the 120 Hz refresh rate. On the software end, the phone runs Android 11 out-of-the-box with XOS 7.6 on top. It’s nice to see the Infinix Zero X Pro running the latest Android 11 instead of Android 10. However, the experience isn’t bug-free.

It has a 6.67 inches AMOLED screen that can go up to 700 nits of brightness. Furthermore, the screen-to-body ratio, aspect ratio, and PPI density are 86.5%, 20:9, and 395. The multimedia experience is pretty good, but it would have been amazing if the single speaker performed better. The Infinix Zero X Pro has a 3.5 mm headphone jack, which is rarely seen in flagship phones. Coming to the build quality, the device has a glass front and back with a plastic frame. The absence of an aluminum frame is a con of this gadget. It weighs in at 193 grams and measures 6.46, 2.98, and 0.31 inches in height, width, and thickness.

The biggest highlight of Infinix Zero X Pro is its camera performance. The phone has a triple camera set-up on the back. It has a 108 MP wide-angle camera, an 8 MP periscope telephoto camera, and an 8 MP ultrawide camera on the back. Both wide-angle and periscope telephoto camera offers optical image stabilization. Apart from the usual camera features of HDR, and panorama, it also has Quad-LED flash. Both the rear camera setup and the 16 MP wide-angle selfie camera allow you to record videos in 4K and 1080p. Coming to sensors, the Infinix Zero X Pro has an under-display fingerprint scanner, accelerometer, gyro, proximity, and compass.

Coming to the battery, the phone has a 4500 mAh lithium polymer battery that supports 45W fast charging. The best part about this phone in this department is that it can go from 0 to 40% charge in just 15 minutes if the advertisements are to be believed. For most users, the Infinix Zero X Pro will easily last for a day on a single charge. If you are a light user, you can expect an even better battery backup. For communication, the device has USB Type-C 2.0, USB On-The-Go, GPS, and Bluetooth. It also has dual-band Wi-Fi, Wi-Fi Direct, and Hotspot. Interestingly, the phone has FM Radio which is usually absent in flagship phones but lacks NFC which is usually present in phones of this budget. 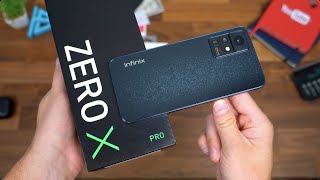 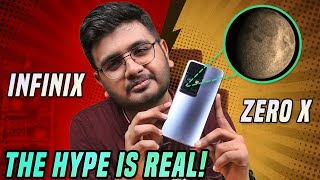