Apple really surprised us with the tablet we’ll be talking about today – iPad Pro (10.5-inch, 2017). First of all, this isn’t a tablet for just everybody, as it’s a bit more expensive one. In case you’re a casual user, you can take some of the previous ones, for example, there’s one with 9.7-inches. The design of this one is just so beautiful and seemingly infinite with bezels being very pleasing. You won’t feel like you’re carrying a brick because the size has stayed pretty much the same. The only thing that has changed is the height of this one, so it probably won’t fit in your old iPad case, unfortunately.

Now that we’ve got that out of the way, let’s talk about iPad Pro 2 or iPad Pro (10.5-inch, 2017) specifications you’ll fall in love with. This is the tablet that has a screen size twice as big as some smartphones today. With that comes one of the best screens we’ve seen on a tablet. A part of the deal is certainly the camera, which we’ll talk about, but also the performance is a thing to be proud of. Let’s start with the speakers that you’ll listen to.

They’re placed in four corners of the iPad like we’re used to, and give a feeling of a stereo environment. There’s also a headphone jack (thank God, we’re seeing less of them as of recent). Lightning connector is present, as you’d expect from the Apple, of course. All of those features are packed in colors called space grey, gold silver, and rose gold, and they all look magnificent. Let’s kick it up a notch on the screen. Apple swears that specs of iPad Pro (10.5-inch, 2017) give you about 20 percent more of usable space on the screen. That’s when we compare it to the previous model, of course. In the end, it makes a difference, and you will certainly notice it, but it’s not a huge jump.

A big thing when speaking about the screen is – you won’t need to buy a keyboard to use it, like on Google Pixel C. Next up – not only is the resolution big and sharp (2224 x 1668 pixels), but the screen panel is IPS LCD Retina. That means the colors are punchy, vivid, and everything is bright. Better than that, there’s an improved refresh rate, and a feature of iPad Pro (10.5-inch, 2017) called ProMotion. You might wonder what’s that one about? Well, let me tell you, previous iPads all ran at the 60Hz refresh rate. That is something we see on PC monitors as well.

iPad Pro (10.5-inch, 2017) can run at up to 120 Hz! Important to realize, that would conserve a ton of battery if left at that. That’s where ProMotion comes to play. It automatically and cleverly adapts the refresh rate to the way you’re using it. For example, if you’re watching a movie it will reduce it to fit the movie file specs. That’s because they record movies in fewer frames per seconds by nature. Therefore, it would make no sense to keep it on 120Hz. But if you’re scrolling through a website or a big list, 120Hz will make things smooth and fast. The same feature can be found on a bigger-screen model, Apple iPad Pro 12.9 (2017). 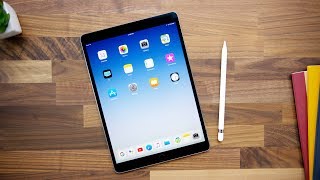 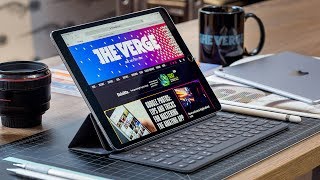