iPhone SE (2022) is a great option for those looking for flagship performance at a relatively affordable price. What also makes this device different from the competition is its retro look and compact size. Speaking of affordability, the phone comes at a starting price of $429 and in Black, White, and Red color options. Similarly, the device has three variants. They all have 4 GB of RAM with 64 GB, 128 GB, and 256 GB of internal storage. The device can support both an e-SIM and a Nano-SIM card, but not an SD card. When it comes to connections, it supports 2G, 3G, 4G, and 5G.

The phone measures 5.45 by 2.65 by 0.29 inches and weighs just 144 grams. This is incredibly impressive as it’s super lightweight and can be used with a single hand. On the protection side of things, the device has IP67 certification for dust and water resistance. Also, it not only has an aluminum frame, but an Ion-strengthened glass. It’s also worth mentioning here that the phone has a Home button which iPhones have been omitting for the past few years. One of the weakest points about owning the iPhone SE (2022) phone is its display quality and multimedia experience. However, it’s not bad by any means. The phone has a 4.7-inch Retina IPS LCD screen with an aspect ratio of 16:9.

Its screen-to-body ratio and PPI density are 65.4% and 326 respectively. Furthermore, it can go up to 625 nits of brightness, which should be fine outdoors. The presence of stereo speakers only adds to the multimedia experience. The 3.5 mm headphone jack is absent. This is no surprise since iPhones rarely have it. As previously mentioned, the Apple A15 Bionic processor delivers superb overall performance. This is expected since the aforementioned processor is considered to be the fastest processor in 2022. The Apple GPU looks after the phone’s gaming requirements.

Moving to the software, the phone runs iOS 15.4. In the sensors department, the phone has an accelerometer, proximity, gyro, compass, barometer, and a front-mounted fingerprint sensor. Its cameras deliver an awesome overall performance. However, it does struggle in low-lighting conditions. The phone has a 12 MP wide-angle camera with OIS on the back. For selfies and video calls, iPhone SE (2022) features a 7 MP camera. As for video recording, the front and the back camera can do so in 1080p and 4K respectively. Besides the usual camera features, the phone has Quad-LED dual-tone flash, gyro-EIS, and stereo sound recording. For communication, the device has dual-band Wi-Fi, Hotspot, Bluetooth 5.0, GPS, and a lightning port.

While iPhone SE (2022) doesn’t have FM Radio, it supports NFC. The phone’s battery life is disappointing though. On moderate use, the phone will get you through most of the day, but you will need to charge it in the evening. It has a 2018 mAh Li-Ion removable battery that supports 18W fast charging. If the ads are to be believed, the phone can go from 0 to 50% in just 30 minutes. You can find phones that charge quicker at similar prices easily. Like recent iPhones, you don’t get a charging adapter with iPhone SE (2022) as well. What you do get is a USB-C to lightning cable. 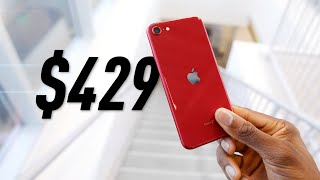 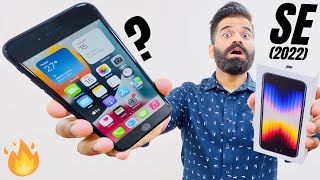