iQOO has been on fire for the last few years and the iQOO 9 Pro is no exception. The phone was first announced on the 5th of January 2022 and released a week later on the 12th. It comes at a starting price of $839 and has three variants. The base variant has 8 GB of RAM and 256 GB of internal storage. The more premium variants have 12 GB of RAM with 256 GB and 512 GB of internal storage. The device doesn’t support an SD card, which is one of the rare cons of possessing this device.

The gadget can handle connections from 2G to 5G. The phone comes in three color options namely, Dark Cruise, Orange, and Legend. The Legend one is white with BMW M branding, which gives it a unique look. These days, it’s tough to tell one phone from others at a single glance. However, that’s not the case with iQOO 9 Pro, as its appearance is unforgettable. It is splash and dust resistant and has an aluminum frame as well. Therefore, the build quality of this phone is pretty good.

What isn’t so impressive is that the phone does feel heavy at 210 grams and isn’t meant to be used with a single hand. As for the dimensions, the phone measures 164.8 by 75.2 by 8.9 mm. The phone has a 6.78 inches LTPO2 AMOLED curved screen, which gives it a premium feel. It has a screen-to-body ratio of 89.6% and a super impressive PPI density of 518. The iQOO 9 Pro not only has support for HDR10+ but 1500 nits of brightness as well. As a result, the phone not only delivers great multimedia even if you are outdoors.

The presence of stereo speakers only adds to the experience. The device lacks a 3.5 mm headphone jack, but that’s often the case with flagship phones. iQOO 9 Pro runs Android 12 with Funtouch 12 on top. The phone will get Android updates for two years and security updates for an additional year. On the negative side, the device isn’t free from bloatware. The performance delivered by the Qualcomm SM8450 Snapdragon 8 Gen 1 is expectedly amazing. The Adreno 730 GPU handles the gaming requirements of the phone. As for sensors, the phone has all the usual sensors.

The phone’s battery performance is mediocre. If you are an average user, the phone should only get you through the day and nothing more. The phone has a 4700 mAh lithium polymer non-removable battery that supports 120W fast charging According to the ads, the device can perform a 0 to 100% of charge in just 20 minutes, Additionally, the device can support 50W fast wireless charging and 10W reverse wireless charging. For communication, the phone has Wi-Fi 6, USB Type-C 2.0, USB On-The-Go, Bluetooth 5.2, and GPS. The phone not only has support for NFC but the extremely rare Infrared Port as well.

Coming to cameras, its primary and selfie camera performs brilliantly—including in low lighting conditions. On the rear, the iQOO 9 Pro has a triple camera setup. The phone has a 50 MP wide-angle, 16 MP telephoto, and 50 MP ultrawide camera on the back. On the front is a 16 MP wide-angle camera. The phone’s camera features include Dual-LED flash, HDR, panorama, and gyro-EIS. When it comes to video recording, the selfie camera can videos in 1080p, while the rear camera setup can record up to 8K. 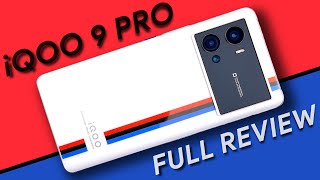 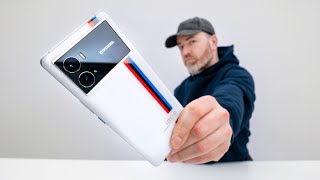