iQOO has been in the industry for only a few years and has already established itself as a great smartphone brand. This is no surprise since it regularly creates some of the best value-for-money phones across different price segments. iQOO 9 SE is another such phone. The phone has a few issues, including the presence of bloatware. Even then, the unnecessary apps can be uninstalled. It runs the latest Android 12 out-of-the-box with Funtouch 12. The phone will get major OS updates for two years, which pales in comparison to what few other manufacturers are offering.

This is another issue with the iQOO 9 SE. What’s surely not an issue is the phone’s overall performance. While the Qualcomm Snapdragon 888 5G processor isn’t the most powerful Snapdragon processor in 2022, it’s still pretty great. It delivers super-smooth performance, as you would expect from it. The Adreno 660 GPU performs just as well. Its build quality isn’t exceptional by any means, but it is sturdy nonetheless. It has a good-looking plastic back that has “iQOO” and “OIS” branding. The device is splash and dust resistant but doesn’t have any official IP rating. The phone measures 6.43 by 3.01 by 0.33 inches and has an average weight of 199 grams.

It has a 6.62 inches FHD+ Super AMOLED screen that has the protection of not Gorilla but Panda Glass. The phone not only has support for HDR10+ but can also go up to 1200 nits of peak brightness. This means you will have a great time watching videos on the phone, irrespective of whether you’re indoors or outdoors. The screen-to-body ratio and PPI density of the phone is 84.9% and 398 respectively. In the audio department, the phone has stereo speakers as you would expect from a premium mid-range phone. Coming to cameras, their overall performance is decent as well. The phone has a 48 MP wide-angle, 13 MP ultrawide, and 2 MP depth sensor camera on the back.

For selfies, the phone features a 16 MP wide-angle camera on the front. Besides, the usual camera features, the device has a Dual-LED dual-tone flash. The rear camera set-up can record videos in 4K, while it is limited to 1080p for the selfie camera. For communication, the phone has dual-band Wi-Fi, Wi-Fi Direct, Hotspot, Bluetooth 5.2, GPS, USB Type-C 2.0, and USB On-The-Go. NFC is present on this phone, while FM Radio is expectedly absent. As for the sensors, iQOO 9 SE has all the usual ones. The device should easily get you over the day on average use, which should be more than enough for most users.

It has a 4500 mAh Li-Po non-removable battery that supports 66W fast charging. iQOO 9 SE can go from 0% charge to full charge in just 39 minutes, which is impressive. It comes in at a starting price of ₹33,990 which approximately translates to $444. The gadget has two variants. The base variant has 8 GB RAM with 128 GB ROM and 12 GB RAM with 256 GB ROM. iQOO 9 SE doesn’t accept an SD card, but neither do most premium mid-range phones. It can support two Nano-SIM cards and connections from 2G to 5G. For colors, you get to choose between Space Fusion and Sunset Sierra. 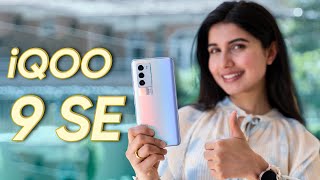 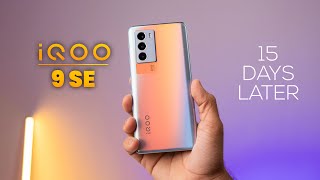