iQOO Neo 6 isn’t only a good option in the premium mid-range segment, but most likely one of the best. Expectedly, it does well in almost every department. While the phone’s overall camera performance could have been better, it still does a decent job. The performance of the main 64 MP main wide-angle camera and the 16 MP wide-angle selfie camera is awesome, though. Besides the main camera, the phone has an 8 MP ultrawide, and a 2 MP macro camera on the back. Camera features include LED flash, HDR, and panorama, and video recording can go up to 4K@30fps.

However, the selfie camera’s video recording abilities are limited to 1080p@30fps. The phone’s battery life is acceptable as well, as it gets you over the day on average use. It has a 4700 mAh Li-Po non-removable battery. The gadget supports 80W fast charging, which isn’t fast, it’s exceptionally fast. As per the ads, it can go from 0 to 50% in just 12 minutes, which is extremely impressive. This is a major plus of owning iQOO Neo 6. Connectivity options include USB Type-C 2.0, USB On-The-Go, GPS, Bluetooth 5.2, dual-band Wi-Fi, Infrared Port, and hotspot. The lack of NFC is shocking.

The phone feels sturdy in hand, and you should have no issues regarding its build quality. It has a glass front with a plastic frame and a gradient patterned plastic back. iQOO Neo 6 has a water-repellent design, which isn’t common even in this segment. A criticism, here, could be the lack of a glass back and metal frame. It has an average weight of 190 grams and measures 6.42 by 3.00 by 0.33 inches. For color, the options are Dark Nova and Cyber Rage. Coming to sensors, the device has an under-display fingerprint sensor, accelerometer, gyro, proximity, and compass.

It has an amazing display quality and multimedia experience. iQOO Neo 6 has a 6.62-inch FHD+ AMOLED screen with a refresh rate of 120 Hz. The gadget not only has support for HDR10+ but can also go up to 1300 nits of brightness. This means you will encounter no issues while using the phone outdoors on a very sunny day. The phone’s PPI density and screen-to-body ratios are 398 and 85.2% respectively. While it does expectedly miss out on a headphone jack, it has high-resolution audio and stereo speakers. Performance is a department where the phone excels.

This isn’t exactly a surprise, since the Qualcomm Snapdragon 870 5G is one of the most powerful chipsets in the segment. The gaming performance delivered by the Adreno 650 GPU is super smooth as well. On the software side, the gadget runs Android 12 with Funtouch 12 on top. While bloatware continues to be an issue on phones from this company, they reduced its amount as compared to previous devices. iQOO Neo 6 comes in at a starting price of about €360, which approximately converts to $386. It comes in two RAM/ROM combinations, which are 8 GB/ 128 GB and 12 GB/ 256 GB. Storage isn’t expandable, but the phone can support up to two Nano-SIM cards and connections up to 5G. 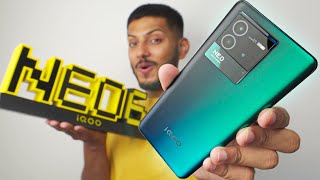 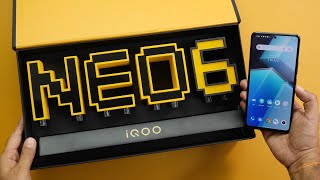