Having announced the iQOO Z5 on the 23rd of September 2021, iQOO released the phone just 5 days later on the 28th of September 2021. One of the best pros of owning this device is its battery. It has a 5000 mAh non-removable lithium-polymer battery that supports 44W fast charging. What’s amazing about this phone is that it can go from 0 to 50% charge in just 26 minutes, as per the advertisements. For charging, it has a USB Type-C port. For communication, the phone has USB On-The-Go, GPS, Bluetooth 5.2, dual-band Wi-Fi, Wi-Fi Direct, and Hotspot. The phone lacks Radio, which is usually absent in mid-range phones, but it is surprising to see that there is no support for NFC as well.

Moving on, the other highlight of the phone is its display. The iQOO Z5 has a 6.67 inches IPS LCD screen, and it has a screen resolution of 1080 x 2400 pixels, a refresh rate of 120 Hz, and an aspect ratio of 20:9. Its screen-to-body ratio of 85% and 650 nits of peak brightness ensure that your multimedia experience is smooth whether indoors or outdoors. The screen of the device is protected by Panda Glass. Sure, it would have been better if iQOO had provided an AMOLED screen, but it doesn’t take away from the fact that its display is quite good.

Moving to dimensions, the phone measures 6.48 inches, 3.02 inches, and 0.33 inches in height, width, and thickness respectively. iQOO should be credited for keeping the weight of the device under 200 grams, as it weighs 193 grams. In terms of connectivity, the device supports 2G, 3G, 4G, and 5G. The device has room for dual Nano-SIM but lacks an SD card slot. On the software side of things, the iQOO Z5 runs Android 11 out-of-the-box with Funtouch 12 on top. It’s worth mentioning here that you do get some Ads in the UI. Qualcomm SM7325 Snapdragon 778G 5G handles the overall performance, while the gaming performance is handled by the Adreno 642L.

If you are a photography enthusiast, this isn’t the phone for you. While the camera performance delivered by the phone is average, it would have been nice if the sensors were better optimized. The phone has a 64 MP wide-angle camera, an 8 MP ultrawide camera, and a 2 MP macro-sensor camera. On the front, the iQOO Z5 has a 16 MP wide-angle selfie camera. The rear camera set-up has features like LED flash, HDR, and panorama and allows you to record videos at 4K and 1080p. In comparison, the front camera can only record videos at 1080p. For sensors, the phone has a side-mounted fingerprint sensor, accelerometer, gyro, proximity, and compass. 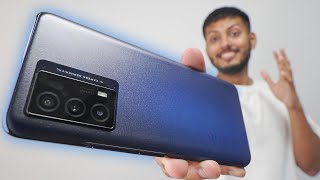 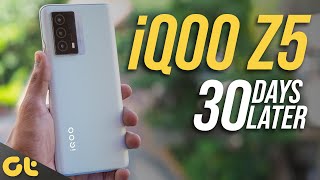