The iQOO Z5x is an interesting phone because it belongs to the lower mid-range segment, unlike most other iQOO phones. The phone was first announced on October 20, 2021, and released days later, on November 01, 2021. The device comes at a starting price of about €220, which approximately converts to $248. The phone comes in three configurations. The base variant has 6 GB of RAM with 128 GB of internal storage. Both the other variants have 8 GB RAM but differ in terms of internal storage offered (128 GB / 256 GB). The memory isn’t expandable, so you need to be cautious while picking the right variant.

However, the phone does have room for two Nano-SIM cards that support connectivity from 2G to 5G. If you are looking for an affordable 5G phone, you should definitely consider this phone. For color, there are three options, Black, Orange, and Silver. The orange one is especially attractive. One of the biggest highlights of this phone is its display quality. While it lacks AMOLED, it does have a 6.58 inches IPS LCD screen. The phone has a refresh rate of 120 Hz, which improves your gaming experience. Furthermore, the device has a screen-to-body ratio of 84.5% and an impressive PPI density of 401.

On the subject, it should be mentioned that the phone has a loudspeaker and a 3.5 mm headphone jack. The multimedia experience is good, but it could have been better if iQOO Z5x had stereo speakers. As for the size of the phone, it measures 6.46, 2.96, and 0.33 inches in height, width, and thickness respectively. The device weighs 189 grams, which falls on the lighter end. The build quality is average as it has a plastic frame instead of an aluminum frame. As for the software, the device runs Android 11 out-of-the-box with OriginOS 1.0 on top.

MediaTek MT6877 Dimensity 900 5G processor delivers a great overall experience. Mali-G68 MC4 GPU, on the other hand, looks after your gaming needs. The iQOO Z5x has a score of 459833 points on AnTuTu. Coming to cameras, the phone delivers a decent overall performance, but not in low lighting conditions. The phone has a dual-camera set-up on the rear, which is surprising. The reason why this is surprising is that most phones in this budget come with a triple or quad camera set up on the back. The phone has a 50 MP wide-angle and 2 MP macro camera on the back.

On the front, the device has an 8 MP wide-angle camera for selfies and video communications. Apart from the usual features like LED flash, HDR, panorama, it also has gyro-EIS. The iQOO Z5x is capable of recording in 1080p and 4K. In the communication department, the device has dual-band Wi-Fi, Hotspot, Bluetooth 5.2, and GPS. The device lacks both NFC and Radio, which is a downside of owning this product. Furthermore, the phone has USB Type-C and USB On-The-Go. The battery life of this phone is pretty good as it should last you for more than a day on a full charge.

The iQOO Z5x has a 5000 mAh lithium polymer non-removable battery that supports 44W fast charging. What’s also nice to see is that the device can go from 0 to 70% of charge in just 38 minutes, as per the ads. As far as sensors are concerned, the device has a side-mounted fingerprint sensor,  accelerometer, gyro, proximity, and compass. 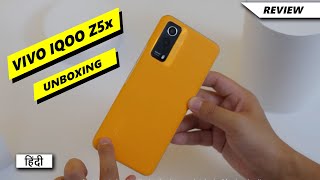