Lenovo Tab 4 10 Plus is a tablet that came this year from Lenovo. It isn’t an iPad competitor, and just doesn’t have those specs in the first place. That’s justified because the price isn’t as high, and you’ll still be getting your bang for you back. Furthermore, a good thing about Lenovo Tab 4 10 Plus is that it doesn’t just try to lure you in with minimal specs. Even if you don’t have enough money for an iPad, this beauty will serve you as good. Now let’s go further, and talk about some of Lenovo Tab 4 10 Plus features:

The design is beautiful, mostly aluminum with some plastic around the edges. They made the front and back of the tablet of glass, which adds to the value. It looks high-quality but it’s still a budget version build, and you might want to go for pristine quality. Not to mention we were a little disappointed with the size of the screen –  10.1-inch, which hasn’t changed much. Lenovo Tab 4 10 Plus resolution is 1200 x 1920 and sports a fairly uncommon 16:10 ratio. The screen isn’t as sharp as iPad, of course, but it has proven to be the great screen for movie watching, reading articles or comics. It might need slightly more pixel density, but besides that, it’s not that far off from world class screen of a tablet.

Let’s take a look at specs of Lenovo Tab 4 10 Plus. First on the list is certainly the processor – Qualcomm MSM8953 Snapdragon 625. With its eight cores, it guarantees a smooth and fast performance no matter what you do. Both the things in general and games you play will work in the same fashion. Moreover, you’ll be getting Adreno 506 GPU in combination with either 3GB or 4GB of RAM. The choice is completely yours on that, as well as internal memory. As a matter of fact, you will get to choose either 16GB or 64GB of storage to work with.

You probably find yourself stuck near an outlet, which sucks. With that intention, Lenovo Tab 4 10 Plus upgraded the battery inside. Because of users needs, it now boasts a 7000 mAh Li-Ion battery inside. Our tests have shown about 8,5hours of watching videos at max brightness. However, Lenovo claims about 20 hours of usage, which would have to be at the lowest brightness and lower usage in our opinion. Nonetheless, the battery of Lenovo Tab 4 10 Plus can be left alone if you’re not using it, and it won’t go down a drop.

In conclusion, let’s casually mention the price of Lenovo Tab 4 10 Plus – 279$, and you are gonna be ecstatic to see what else you get included. For the purpose of you taking pictures of yourself, you have a 5MP camera, which is just enough. We’ve noticed hair details to be sharp and clear in fairly good light conditions. The camera on the back is of 8 MP resolution, which isn’t that high. The picture size doesn’t allow you to crop your images that much, you’ll still be surprised how vivid and good-quality the pictures are. Ultimately, if you aren’t looking to spend a lot of money, and have a useful device, Lenovo Tab 4 10 Plus is the way to go. 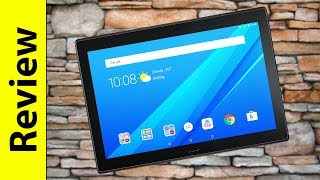 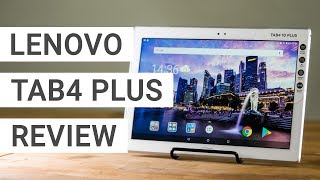