Even though Lenovo Yoga Tab 3 Plus came out in the December of 2016, it’s still relevant today. It has all the features you would expect from a tablet, and more. Right off the bat, you’ll notice the design – and the black and grey are the only available color. What more can you ask, both are a classic, solid color, making tech look beautiful. It possesses a cleverly designed piece at the bottom, allowing you to either add a keyboard manually or help it stand flat on a table. We think it’s time for us all to take a look at specs of Lenovo Yoga Tab 3 Plus:

First of all, we have to mention the screen. Now, the screen size hasn’t changed from the previous Pro model, and it’s still 10,1-inch in size. However, the resolution is a thing to be proud of in this one. Lenovo Yoga Tab 3 Plus boasts a WXQGA 1600 x 2560 pixels resolution, making you stare at the screen in wonder. The aspect ratio is a bit uncommon, 16:10, although becoming a standard for tablets. This one was mainly intended for videos and movies watching. With that in mind, if you’re a lover of all things TV, this is the right tablet for you.

Now let’s take a look at other features of Lenovo Yoga Tab 3 Plus. In addition to watching movies with ease, you’ll be able to do a lot of things effortlessly. This beauty comes equipped with an Octa-core Qualcomm MSM8976 Snapdragon 652 processor. And not only that, the graphics are a thing of the future as well, with you choosing between an Adreno 506 or Adreno 510 model. The choice on your part is between the two models available, one with only Wi-Fi integrated, while the other one possesses data network 3G/LTE. In the end, it all comes down to your habits, and your needs being met.

Equally important to mention is the amount of RAM you’re receiving – 3GB. Now, 3GB isn’t an extreme, but it’s relevant for all the functions you’ll need to do inside the UI. The menus and navigations are simple and beautiful thanks to the Android 6.0.1 (Marshmallow). Also, if you’re fond of swimming pool, we’ll have you know that Lenovo Yoga Tab 3 Plus has an IP52 certificate. That implies that you shouldn’t really dive it into the pool, but an occasional splash won’t hurt your phone. To sum things up, we have to talk about that precious battery juice next.

Lenovo Yoga Tab 3 Plus comes equipped with a massive 9300 mAh Li-Ion battery. That’s almost unheard of for a tablet and is certainly the feature to be proud of. To clarify, that means you can watch movies in full resolution without watching out for the battery life. Lenovo even promises about 18 hours of watching movies in full resolution, which is something you’ll have to test for yourself. The camera on the back is 13 MP, which is quite a bit for a tablet. That means you can still take a good picture of your surroundings even if you don’t have a phone with you. A front camera sports 5 MP of resolution, which is just enough for a Google Duo video conversation or taking a quick selfie. 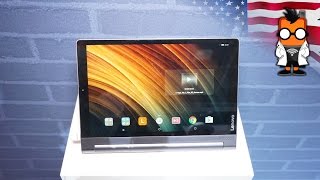 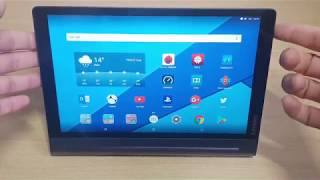 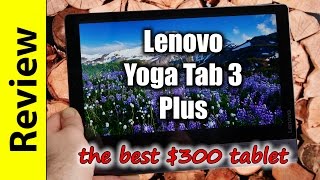 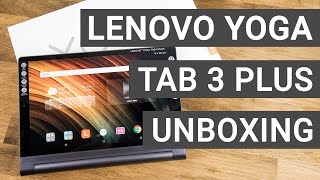