Logitech has always been the king in computer peripherals. You could always find a decent option whatever your desires were. Logitech G903 is no different and brings something unique, but pricey. The mouse is wireless or wired if you decide to plug the cable you get inside the box. But there’s a slight, although awesome catch with it. The biggest problem with wireless mice is charging. You need to plug or put it on a charging platform in order to use it again, right? And for that time you’re left without a mouse to use, which could prove troublesome.

Logitech G903 features are made in a unique way. While the secret isn’t mostly in the mouse itself, it’s hidden in a special mouse pad you can buy from Logitech. The pad has a special technology inside that allows your mouse to charge while being moved around and used. This means no downtime, and no weird platforms on your desk, just a common-looking mouse pad that isn’t so common. The bad thing – while the Logitech G903 price is $118 on Amazon, the mouse pad does not come in the package. You’ll need to buy it separately for around  $99, which adds up to a lot.

Certainly more expensive than Asus ROG Spatha, which does feature a charging dock. However, it’s not all so bad – this mouse comes equipped with 13 buttons. Yes, some are used to increase and decrease DPI, but others are free to be programmed however you like it. You can even remove some of the buttons to reduce weight if you’re not using them anyway. The mouse itself is purely black, and sports a great RGB color lighting, just like let’s say Razer DeathAdder Elite. It’s a common feature on all gaming mice in both 2017 and 2018, and knowing the price of this one, it would be a total disaster if it didn’t possess that feature.

And even though you can connect a cable if you wish so, there’s absolutely no need, in our opinion. That’s thanks to today’s advancements in wireless technology, and especially with Logitech’s Lightspeed Wireless. There’s absolutely no stuttering, delay or latency, and it’ll be just as good as a wired one. Now, it does not come with 16000 DPI like Corsair Glaive RGB, only 12000, but we personally think both of them are overkill. Yes, you need great sensitivity for gaming, but anything more than 4000 would be too much.

The sensor is optical, which means more surfaces to work on. But what if you do not have the money for an additional mouse pad? Is that gonna cripple your work with Logitech G903? The easy answer is – no, everything will still function, albeit with less ease-of-use. You see, that additional mouse pad not only keeps your mouse charged, but it also acts as a wireless receiver. If you don’t have it, you’ll have to go the old-fashioned way – plug an USB dongle into your USB port. Plus, you’ll have a lot of downtime, as after approximately 30 hours of use you’ll have to plug it a Micro USB cable and pause your adventures for about two or three hours before it’s recharged. 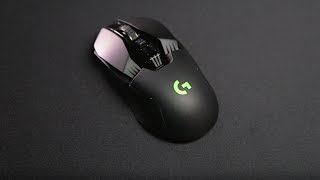 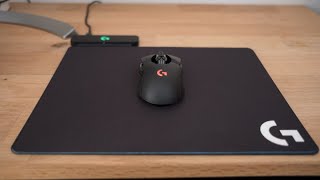