Logitech K120 is a very affordable, relatively low-priced keyboard coming to us from Logitech. It’s good as both the main keyboard and a spare one to keep just in case. It’s not very modern, to be honest, and doesn’t sport any of the cool things like media buttons on Logitech Wireless Touch Keyboard K400 Plus and others. Does that fit your needs? If so, you just might have found a new one. Plus it’s Logitech, and they’re the kings in mice and keyboards department. So let’s see what the specs of Logitech K120 speak in its defense.

First of all, we were interested how good it was when it comes to gaming. In user reviews, it has proven very reliable and durable. The keys are a thing of the future, very well distributed and wide enough for your fingers not to press next ones by accident. Also, we’ve found that print on the buttons doesn’t wear off easily, it has survived some quite hardcore gaming for quite a long time. It’s perfect for those that have to do a lot of typing in their job or hobby because keys are very slim.

Software developers were pretty proud of having this beauty, not only because it’s easily replaced in case things go bad. But also because it has slim, low-profile keys, a very short keystroke. Which means you will probably have a little faster response, and best of all – it’s very quiet. It’s not exactly silent, but pretty quiet when used excessively. It doesn’t have that bouncy feeling when typing, so if that’s not your thing, you might want to go for a gaming keyboard like Redragon K552 KUMARA. The price of Logitech K120 from what we found was around $22. It varies, and you might find it for as low as $14 which is insanely affordable.

Now we’re coming to the thing that might bother you. Yes, it is a wired keyboard unlike Logitech K380 Bluetooth Keyboard and its bigger brother, Logitech K480. We’ll admit there aren’t many difficulties in using a wireless one. Response time difference has been gotten rid of a long time ago, that’s for sure. But in case you hate worrying if batteries will run out, it’s a good choice. You should get it if there isn’t a long distance between your PC’s case and the keyboard. Additionally, it’s pretty lightweight, but it stays in place and looks pretty classic and professional.

Of course, there are no flashy backlights and all colors of the rainbow, but you just might like how simple it is. So if you often find yourself playing games or writing in pitch-black darkness, you might want to take a look at Razer BlackWidow Chroma V2, which unfortunately costs 7x more. We’ve come to the conclusion. In case you like and need a classic keyboard without too many flashy features to it, it’s the way to go. Same goes if you don’t want to play and pause music and control other things directly. It’s also a plug-and-play with pretty big characters, so it’s perfect for your elderly relatives. The other option is for those that have to look while typing. 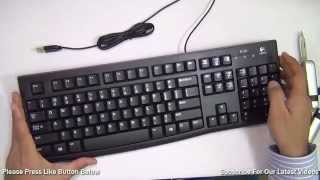 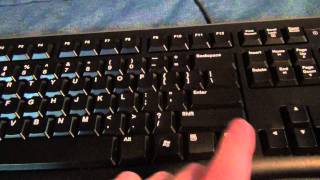 3.8
Post a Review Please note that each user review reflects the opinion of the respectful author. To get approved, make sure that the review is big enough and contains unique opinion.