There’s a reason for Logitech putting out more and more multi-device keyboards on the market. You, and many others you know, are using both a PC, a laptop and a smartphone. It would be really good if you could get used to one keyboard, and just use it across all of them, wouldn’t it? That’s exactly what Logitech K380 Multi-Device Bluetooth Keyboard specs will allow you to do. It’s a very slim example when it comes to keyboards, and has a unique look to it. All the keys are round instead of square, which might be difficult at first to get used to.

But when you do, you’ll find it very good, especially because the keys aren’t ”tall”. Therefore the bulk has been cut down, and it’s very easily carried on your travels, or just in a bag. Like you probably guessed from the name and the lack of cables, this is a wireless, Bluetooth keyboard. We mentioned carrying, but you first need to realize how much it weighs. The exact weight is around 420g with batteries, which is both suitable for a desktop work, but not too big for a bag.

We mentioned batteries, which is one of the most important features of Logitech K380 Multi-Device Bluetooth Keyboard and many others. It requires two AAA batteries to work, and Logitech promises up to two years of juice with moderate usage. The Easy-Switch buttons in the top-left corner are what we’re after. It will allow you to easily switch between devices and toggle one or the other. The keyboard itself also recognizes Windows, Mac, Android or iOS, and remaps the keys accordingly. This reminded us of Microsoft Universal Mobile Keyboard, which sports some similar features. The only thing that might bother you is the roundness of the keys. In our analysis, we had no problems getting used to it.

But, if you’ve got big hands, it might prove a problem. The additional thing is how close caps lock is to letter A, which sometimes gets in the way. If you’re one of us, with smaller or average-sized hands, it’s comfortable and works great. We’ve taken a look at a lot of keyboards, and in our review of Logitech K380 Multi-Device Bluetooth Keyboard, the only thing that came close in features and price range was its older brother. We’re talking about Logitech Bluetooth Multi-Device Keyboard K480, which is a bigger version.

They’re both compact keyboards, don’t get me wrong, but one is slightly bigger in size, and might prove better and more comfortable for you. The prices aren’t that different, the smaller version coming in at $32, while the K480 costs around $30. It’s just a matter of your day-to-day job, and whether you’re looking to type a lot, or play some games from your couch. Whatever the case may be, both are one of the best multimedia, multi-device keyboards for both Windows and Mac, but also Android and iOS. That means – you might’ve found just what you’re looking for, and it’s very affordable. 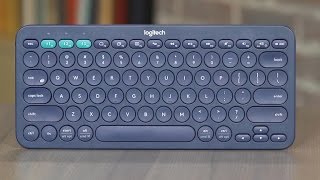 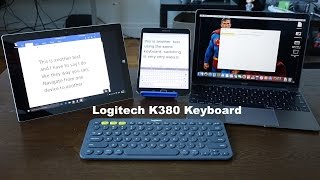