Logitech Wireless Touch Keyboard K400 Plus is a keyboard-touchpad combo from Logitech, as you can see in the pictures. It’s hardly revolutionary, but an insanely good combination in this price range. It’s  extremely valuable if you’re the type of person that likes wireless accessories. We understand the struggle because we’re the same way sometimes. You’d just like to lie on your couch, and don’t have to get a book in order to move your mouse. Maybe you have a glass table, and it just won’t work at all. It’s time those struggles ended, and you’re getting a bang for your buck, trust us.

So let’s start with the general specs of Logitech Wireless Touch Keyboard K400 Plus and compatibility. First of all, it can be used with any Windows, old or new. Besides that one, you can use it with smartphones and mobile phones sporting Android 5.0. The range is pretty big, and we doubt your room is 10 meters in range, which is what this beast can cover. As always, you don’t need to hit the line of sight or anything, so no more being stuck and hitting the right angle.

The touchpad is just genius and very, very useful. Not only can you control the arrow on the screen, you can right and left click, but even more. Control volume, increase, decrease or mute it completely. You can also use it for gestures, which can be done in the Logitech Options software. We’ll mention the possibilities in just a minute. We’ve gotta mention the Fn key you often find on laptops, which allows for a secondary function of some keys. It’s one of the best keyboards used for multimedia, and keys can be used, and if not already, configured to do some unique things. You can navigate and open new tabs in a browser, switch views, take screenshots, play and pause, and more.

Here comes the set of Logitech Wireless Touch Keyboard K400 Plus features that make it stand out. First of all, the rubber pad underneath will protect both the keyboard and the surface from damage. It’s slightly raised, which you’ll notice is the place for batteries. Two AA batteries are enough to last you about 18 months with 2 hours of typing a day. We’re unsure how accurate the information is, but we trust you’re smart. Just turn it off when not in use, and you’ll squeeze every last bit of the power.

In the end, it has a USB receiver just like many other wireless keyboards we know. But not only those, one Logitech receiver is usually enough for 6 devices like a Logitech Wireless Mouse M510. Before we conclude our story for today, we’ll remind you of Logitech Options capabilities we mentioned. You’ll be able to change scroll direction, pointer speed, and customize three gestures behavior. You can also change F1-F12 keys to a different function if it fits your needs. In the end, this is an extremely affordable multimedia keyboard, with Logitech Wireless Touch Keyboard K400 Plus price being only $23. That makes it an affordable, yet a very useful option. Remember, it has 5 times less of a price than Microsoft Key! That speaks volumes, that’s for sure. 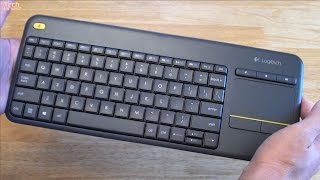 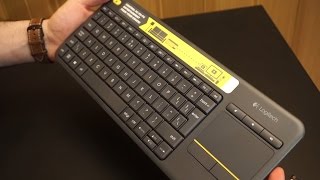