The Microsoft Surface Duo 2, which is Microsoft’s current flagship phone, was released on the 21st of October 2021. The phone was released a month back on the 22nd of September 2021. Qualcomm SM8350 Snapdragon 888 5G processor that is based on the 5 nm technology powers this device. The Adreno 660 GPU looks after your gaming experience, which is supported by the 90 Hz refresh rate. The device runs Android 11 out-of-the-box, but the company has promised three years of updates for the phone. However, it’s worth mentioning here that there have been reports about the software not being bugs free. The smartphone supports one physical Nano-SIM and one e-SIM. Also, it supports connectivity from 2G to 5G.

The device has stylus support, which is one of its highlights. Coming to dimensions, the phone measures 184.5 mm inches in height, 145.2 inches in width, and 5.5 mm inches in thickness when it’s unfolded. Once you fold, the smartphone measures 145.2 mm, 92.1 mm, and 11 mm in height, width, and thickness respectively. The device weighs 284 grams, which is understandable considering it is a foldable phone. As the Microsoft Surface Duo 2 is a foldable phone, multitasking on should be pretty good. The glass back is protected by Gorilla Glass, while the glass front is protected by the top-of-the-line Gorilla Glass Victus.

The price of the three variants is $1499, $1599, and $1799. For color, you can choose between Glacier and Obsidian. As far as cameras are concerned, the phone has a triple camera set-up on the back. It has a 16 MP ultrawide camera with a 12 MP wide and telephoto camera. On the front, the device features a 12 MP wide-angle camera. The rear camera set-up has features like Dual-LED dual-tone flash, HDR, and panorama. The front camera can record videos at 1080p, while the rear camera set-up allows you to record videos at both 1080p and 4K. The camera performance of the Microsoft Surface Duo 2 isn’t up to the mark, and especially when it comes to a premium device.

In the sound department, the phone lacks the 3.5 mm headphone jack but has stereo speakers. For communication, the device has dual-band Wi-Fi, W-Fi Direct, Hotspot, and Bluetooth 5.1. While you won’t be able to listen to radio on this phone, it does have USB Type-C 3.2, GPS, and NFC. Coming to sensors, the Microsoft Surface Duo 2 has a side-mounted fingerprint sensor, dual accelerometer, dual gyro, dual proximity, and dual compass. On the subject of battery and charging, the device has a 4449 mAh non-removable lithium-polymer battery. The gadget supports 23W fast charging and should last a day on a single charge for most users. 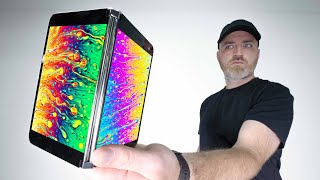 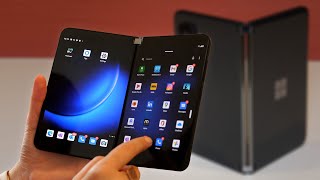