If you’re looking for a stylus phone for $499, Moto G Stylus 5G (2022) is a good option. However, you may not like it if you are looking for one that also delivers in the camera and display departments. Other than that, it is a solid phone that will please with you its battery life, software experience, and overall performance. On the subject, it should be mentioned that Qualcomm Snapdragon 695 5G delivers smooth overall performance. The GPU used here is Adreno 619. Unlike several other phones that still ship with Android 11, this one runs Android 12 out-of-the-box.

The Android experience, as is often the case with Motorola phones, is clean and near-stock. Moto G Stylus 5G (2022) will only get a single Android OS update and security updates for three years. This update promise isn’t the best in the segment but isn’t the worst either. With the phone lasting for one and a half-day on average use, it’s safe to say that the battery longevity is awesome. However, the phone only supports 10W charging, which certainly decreases its appeal considerably. The device has a 5000 mAh battery Li-Po which will take multiple hours to go from 0% to 100%.

The huge battery size and the presence of the stylus contribute to the weight of the device. The gadget does feel heavy at 215 grams, but on the bright side, it is sturdy. Moto G Stylus 5G (2022) looks great, and it comes in Steel Blue and Seafoam Green. Like most Motorola phones, it has a water-repellent design. One of the best things about this phone is that as soon as you remove the stylus from the phone, you will see a menu that provides you easy access to notes, and a color book app among others. The stylus is great for taking notes, creating doodles, and editing pictures to an extent.

Considering the price, the stylus does an appreciable job. What’s surely not appreciable is the phone’s average camera performance. On the rear, the phone has a 50 MP wide-angle camera with OIS, 8 MP ultrawide, and a 2 MP depth sensor camera. Selfie duties are looked after by the 16 MP wide-angle front camera. The phone’s camera features include gyro-EIS and can record videos in 1080p. In the communication department, the device has USB Type-C 2.0, GPS, Bluetooth 5.1, dual-band Wi-Fi, and a Hotspot.

The device not only supports NFC but also FM Radio, which is quite rare in mid-range phones. It has all the usual sensors. The display is one of the weakest departments of the phone. Moto G Stylus 5G (2022) has a 6.8-inch FHD+ screen with a refresh rate of 120 Hz. While the presence of a 120 Hz refresh rate is appreciated, it’s disappointing to see the phone lacking an AMOLED screen. Its screen-to-body ratio and PPI density are 85.8% and 395 respectively.

On paper, it can go up to 650 nits of brightness, but in reality, you will face issues while using it outdoors. This is also a major con of owning Moto G Stylus 5G (2022). In the sound department, it has a loudspeaker and a headphone jack but misses out on stereo speakers. The device comes in a single variant of 8 GB RAM and 256 GB ROM. On top of that, it supports an SD card, which not a lot of mid-range phones do. While it can only support a single Nano-SIM card, it can handle connections up to 5G. 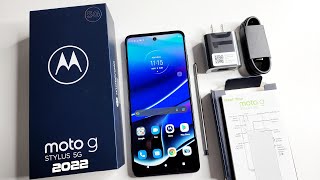 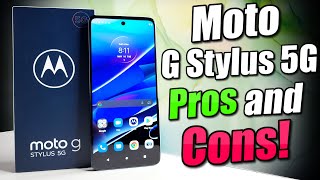