Moto G52 is a recent addition to the super-competitive budget mid-range segment, and it’s a good phone overall. It’s one of those few devices that does decently in most departments. An area where the phone doesn’t do well is the camera department. Its overall camera performance is average. The phone has a 50 MP wide-angle camera with PDAF, 8 MP ultrawide, and a 2 MP macro sensor camera on the rear. Additionally, it has a 16 MP wide-angle front camera for selfies, which turns in, acceptable shots in well-lit environments. It has all the usual camera features and can record videos up to 1080p.

One of the best aspects of this phone is that it is among the thinner and lighter in the segment. To be precise, the device measures 6.30 by 2.93 by 0.31 inches and weighs 169 grams. The phone has a plastic back, and it feels durable. It is comfortable to hold thanks to the curved sides. The gadget has a water-repellent design, which is nice to see, but on the other hand, it picks up fingerprints easily. However, this issue can be solved by using a cover. Moto G52 is a good-looking phone, which comes in Charcoal Gray and Porcelain White.

One of the phone’s biggest pros is its display, which isn’t a surprise considering the specs. The phone has a 6.6-inch FHD+ pOLED screen with a refresh rate of 90 Hz. Both its screen-to-body ratio and PPI density are impressive at 86.9% and 402 respectively. In the sound department, the phone not has only a 3.5 mm headphone jack but stereo speakers as well, which is largely uncommon at this price. If you are someone who loves to watch movies and videos on your phone, then Moto G52 is surely one of the best in this segment.

The phone’s overall performance is smooth thanks to the Qualcomm Snapdragon 680 4G processor. The Adreno 610 GPU, on the other hand, takes care of the phone’s gaming requirements. The smartphone runs Android 12 out-of-the-box, for which Motorola deserves credit, as several newly released phones still run Android 11. It has bloatware, but most of the unnecessary apps can be uninstalled. The phone delivers solid battery life, as it can last for one and a half days on moderate use. Moto G52 has a 5000 mAh Li-Po non-removable battery with support for 30W fast charging. The phone supports USB Type-C 2.0, NFC, GPS, Bluetooth 5.0, dual-band Wi-Fi, and a hotspot.

As for the sensors, the phone has a side-mounted fingerprint sensor, accelerometer, gyro, proximity, and compass. Moto G52 comes in a single variant of 4 GB RAM and 128 GB of internal storage. Many competing phones come with 64 GB of storage at this price, so it’s awesome to see 128 GB storage here. The device, while supporting an SD card, has a Hybrid SIM slot. Therefore, you can’t use two Nano-SIM cards and an SD card at the same. It can handle connections up to 4G but not 5G. This is disappointing since you can get 5G phones at this price. It comes in at a starting price of about €250, which approximately converts to $263. 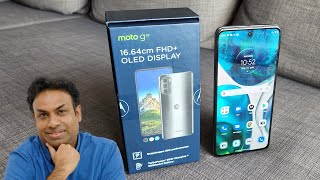 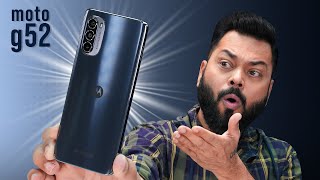