At a starting price of €329 (about $352), Moto G82 is one of the best value-for-money phones in its segment. Its value increases even further when you consider the fact that it provides a clean, near-stock Android experience, like most Motorola phones. In comparison, most other manufacturers are doing the opposite, in varying degrees. The phone not only runs Android 12 out of the box but will also get two major operating system updates in the future. Motorola’s work, on the software front, has been impressive, to say the least. It delivers a smooth performance thanks to the Qualcomm Snapdragon 695 5G chipset.

The GPU used here is Adreno 619 and if you’re a hardcore gamer, it’s better to look elsewhere. Motorola’s devices are often known for being slim and lightweight and Moto G82 falls in the same category. As a result, the phone is easy to handle. To be precise, the device weighs in at just 173 grams and measures 6.33 by 2.93 by 0.31 inches. While the device’s back looks like glass it’s actually made of plastic. Also, it is prone to fingerprints and smudges. Therefore, if you are someone who wants his device free from such issues, it’s better to use a case. The phone has a water-repellent design which is always great to have.

Moto G82 comes in two color schemes namely, Meteorite Gray and White Lily. It has an accelerometer, gyro, proximity, compass, and a fingerprint sensor on the side. What’s also located on the side, is the Hybrid SIM tray. As a result, you can either use two Nano-SIM cards or an SD with a Nano-SIM card. The phone’s display is amazing and is, in fact, one of its major highlights. It has a 6.6-inch FHD+ pOLED screen with a resolution of 120 Hz. Barely any phones, at this price, feature a refresh rate of 120 Hz. For this, Motorola deserves tons of credit.

Both its screen-to-body ratio of 86.4% and PPI density of 402 are impressive as well. In the sound department, Moto G82 has a headphone jack and stereo speakers. The phone’s overall performance is decent as well. On the rear, the phone has a 50 MP wide-angle camera with OIS, 8 MP ultrawide and 2 MP macro camera. There aren’t many phones with OIS at this price. It also has a 16 MP wide-angle camera for selfies and video communications. Camera features include LED flash, HDR, panorama, and video recording is allowed up to 1080p@30fps.

With average use, the phone’s 5000 mAh Li-Po non-removable battery can last around 2 days, which is excellent. Even if you are a heavy user, it will still get you over the day. Moto G82 supports 30W fast charging which could have been quicker considering the price. Connectivity options include USB Type-C 2.0, NFC, GPS, Bluetooth 5.1, and dual-band Wi-Fi. Its only variant has 6 GB of RAM and 128 GB of internal storage. It supports connections up to 5G, as you would expect from it. 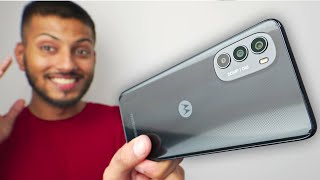 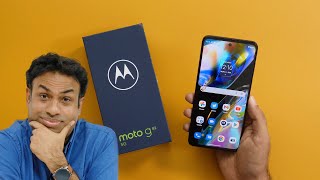