Motorola Edge 20 Fusion is one of those phones that gets most things right. A couple of its cons aren’t noticeable right away, but you will notice them after using it for a considerable amount of time. Something which is visible right away is that the phone feels heavy despite having a weight of 185 grams. As for the dimensions, it measures 6.54 by 2.99 by 0.33 inches. It has a glass front with a plastic back and frame. The phone doesn’t rank high on either comfort or avoiding fingerprints. It comes in Electric Graphite and Cyber Teal. In terms of looks, the phone is simply okay.

On the bright side of things, the device is sturdy and has a water-repellent design. The phone has a side-mounted fingerprint sensor, which might make it feel outdated for those who prefer an in-display one. Other sensors include an accelerometer, gyro, proximity, and compass. The 32 MP wide-angle selfie camera delivers average performance, which is one of the two previously mentioned cons. On the back, the phone has a 108 MP wide-angle, 8 MP ultrawide, and 2 MP depth sensor camera. The rear camera setup, unlike the front camera, delivers awesome results. The device’s camera features include a mix of usual and unusual ones like LED flash, HDR, panorama, and gyro-EIS.

While the device can record videos up to 4K@30fps, the selfie camera is limited to 1080p@30fps. The third issue with this phone is its mediocre audio quality. While loudness isn’t an issue on this phone, clarity, very much, is. It’s also disappointing to see the phone miss out on stereo speakers since barely any phone at this budget does. On the flip side, the phone has a headphone jack, which isn’t a guarantee at this price. Despite all this, you will have a positive multimedia experience thanks to the awesome display quality. It has a 6.7-inch FHD+ OLED screen with a refresh rate of 90 Hz. The device’s screen-to-body ratio and PPI density are 85.9% and 393 respectively.

It not only has support for HDR10+ but can also go up to 800 nits of brightness. While this isn’t the best in the segment, you shouldn’t have any issues using the phone outdoors, even on bright days. Performance is smooth thanks to the MediaTek Dimensity 800U chipset. The phone’s gaming requirements are handled by the Mali-G57 MC3 GPU. It runs Android 11 when unpacked and has minimal bloatware. The phone delivers a near-stock Android experience, which is almost always a huge benefit of owning a Motorola device. The phone gets you around one and a half days, on average use, which is great.

It has a 5000 mAh Li-Po non-removable battery with support for 30W fast charging. Considering the price, the charging speed could have been a lot better. Besides USB, connectivity includes FM Radio, NFC, GPS, Bluetooth 5.0, dual-band Wi-Fi, and a Hotspot. The device comes in at a starting price of $335 and both variants have 128 GB ROM with 6 GB and 8 GB RAM. It supports an SD card, but do note that it has a Hybrid SIM slot. Therefore, in case you use an SD card, you can’t use your second Nano-SIM card. Connections are supported up to 5G, as you would expect from a phone of this budget. 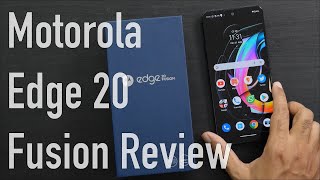 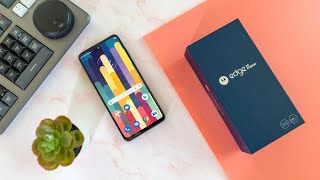