For color, there are three options, Midnight Blue, Iridescent Cloud, and Blue Vegan Leather. Interestingly, if you choose the first two options, the weight of the device would be 190 grams but if you go for the third option, the device becomes lighter — the weight shrinks to 185 grams. Either way, this smartphone is lightweight compared to the hardware it uses. The Motorola Edge 20 Pro measures 6.42, 2.99, and 0.31 inches in height, width, and thickness, respectively. The build quality is great, as it has an aluminum frame besides a glass front and back, both of which are protected by Corning Gorilla Glass 5.

Additionally, the Motorola Edge 20 Pro has an IP52 rating for dust and water resistance. Your multimedia experience on this phone should be pretty amazing because of its 6.7-inch OLED screen with HDR10+ support. Furthermore, the screen-to-body ratio and aspect ratio is 89% and 19.5:9 respectively. On the software side of things, the phone runs Android 11. Motorola’s near-stock Android experience coupled with Qualcomm SM8250-AC Snapdragon 870 5G processor keeps the phone running super smooth. The Adreno 650 GPU delivers a great gaming performance, which is further strengthened by the 144 Hz refresh rate.

Besides 2G, 3G, and 4G, the phone supports 5G connectivity, which is quite evident from the processor’s name itself. The phone has room for two nano-SIM cards but not an SD card. The Motorola Edge 20 Pro has a 4500 mAh battery that supports 33W fast charging. The phone will thus easily last for one and a half-day on a full charge. However, it would have been better if the company provided faster-charging capabilities. For communication, the device has USB Type-C 3.1, GPS, Bluetooth 5.1, dual-band Wi-Fi, Wi-Fi Direct, and Hotspot. Interestingly, the Motorola Edge 20 Pro has NFC and DisplayPort 1.4 which isn’t very common.

In the sound department, the Motorola Edge 20 Pro has a loudspeaker but lacks stereo speakers, which is a rare downside of owning this device. Coming to cameras, the phone has a triple camera setup on the back. It has a 108 MP wide-angle camera, an 8 MP periscope telephoto camera, and a 16 MP ultrawide camera. The rear camera setup can record videos in 8K, 4K, and 1080p. On the other hand, the 32 MP wide-angle selfie camera can record in 4K and 1080p. While the overall camera performance is great, the low-light camera performance could have been better. 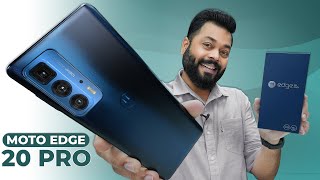 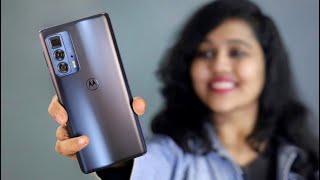