The device doesn’t allow for the use of an SD card, which is the norm for flagship phones. What the device does allow for, are two Nano-SIM cards and connections from 2G to 5G. The Motorola Edge 30 Pro’s display quality is awesome. While the device does have a plastic frame, it also sports a water-repellent design, which improves its appeal. The phone has a glass front and back, protected by Corning Gorilla Glass 3 and Corning Gorilla Glass 5 respectively.

This is a bit strange since the glass front is usually better protected. Coming to dimensions, the phone measures 6.42 by 2.99 by 0.35 inches. It also weighs in at 196 grams, which does fall on the lighter end. The device has a 6.7-inch FHD+ OLED screen whose aspect ratio is 20:9. It has a screen-to-body ratio of 87.4% and a PPI (pixels per inch) density of 393. Motorola Edge 30 Pro also includes support for HDR10+. Looking at the specs, it’s safe to say that the phone’s multimedia experience should be amazing.

It’s also worth mentioning the device has stereo speakers but lacks a 3.5 mm headphone jack. As previously mentioned, the performance delivered by the Qualcomm SM8450 Snapdragon 8 Gen 1 is top-notch. However, Motorola Edge 30 Pro does heat up a lot during demanding tasks like gaming. Speaking of gaming, the Adreno 730 GPU takes care of the gaming performance. Another major advantage of owning this phone is that it delivers a stock Android experience. It barely has any bloatware.

The device not only runs Android 12 out of the box but will get system updates for two years and security updates for three. The sensors on this phone include an accelerometer, gyro, proximity, compass, barometer, and a side-mounted fingerprint sensor. It also has support for Ready For, which allows you to connect your phone to your TV and perform several useful actions, including making video calls. Coming to cameras, it performs excellently in proper lighting conditions.

The star of the show is undoubtedly the 60 MP wide-angle front camera. The phone has a 50 MP wide-angle, 50 MP ultrawide, and 2 MP depth sensor cameras on the back. Besides the usual features, the phone has Dual-LED dual-tone flash, 10-bit HDR10+, and gyro-EIS (electronic image stabilization). The rear camera setup can record videos up to 8K, while the front one can do so up to 4K. In the communication department, the device has dual-band Wi-Fi, Wi-Fi Direct, Hotspot, Bluetooth 5.2, GPS, and USB Type-C 3.1.

The device not only has NFC but DisplayPort 1.4 as well. Where the Motorola Edge 30 Pro could have been better is the battery backup. However, it will still get you over the day on moderate use. The phone has a 4800 mAh lithium polymer non-removable battery that supports 68W fast charging. On a positive note, the Motorola Edge 30 Pro can go from 0 to 100% off charge in just 35 minutes, as per the ads. In addition, the phone also supports 15W fast wireless and 5W reverse wireless charging. 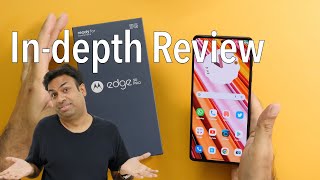 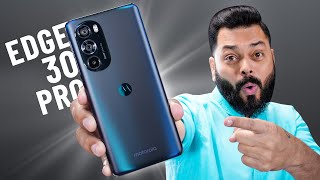