Motorola Moto E20, which belongs to the budget segment of smartphones, was launched on the 4th of October 2021. The biggest advantage of owning this phone is its affordability, as you can purchase it for $245. For color, there are two options, Blue and Gray. What’s surprising about this device is that it only comes in a single configuration. The device has 2 GB of RAM and 32 GB of internal storage. eMMC 5.1 is the storage type used here. While the device is certainly affordable, it would have been better if Motorola provided at least 3 GB of RAM.

The memory can be increased with an SD card, but the device has a hybrid SIM card slot. The device supports connectivity from 2G to 4G and dual stand-by Nano-SIM cards. The Motorola Moto E20 doesn’t feel heavy, as it weighs 184 grams. Coming to the phone’s dimensions, it measures 6.49 inches in height, 2.97 inches in width, and 0.33 inches in thickness. While the device has a plastic body, it also has a water-repellent coating. This does make the phone a bit more protected, something we should praise Motorola for.

The multimedia experience on this phone is below average. Motorola Moto E20 has a 6.5-inch HD+ screen that has an aspect ratio of 20:9. It has an IPS LCD panel, while the screen-to-body ratio and the PPI density are 82% and 270 respectively. The device has a loudspeaker, and it retains the 3.5 mm headphone jack, which is nice to see. The other positive point of the gadget in this department is its large display and its impressive screen-to-body ratio. The phone runs the Android 11 (Go edition).

The Unisoc T606 processor handles the overall performance of the phone, which isn’t great, as you might have guessed. The Motorola Moto E20 is only intended for basic work, and you shouldn’t attempt heavy tasks on it. Speaking of heavy tasks, the Mali-G57 MC2 GPU handles the gaming requirements of the phone. Obviously, the gaming performance is really poor, and the device can only handle rudimentary games. The camera performance, on the other hand, is a bit better.

The phone has a 13 MP wide-angle camera and a 2 MP macro camera on the rear. The rear camera setup has features like LED flash, HDR, and panorama. On the front, the device has a 5 MP camera for selfies and video calls. When it comes to video recording, both the front camera and the rear camera setups can record in 1080p. Coming to sensors, Motorola Moto E20 has a rear-mounted fingerprint sensor, accelerometer, and proximity sensor.

The phone has a 4000 mAh lithium-polymer non-removable battery, which supports 10W charging. While the device has USB Type-C 2.0, it doesn’t support fast charging. The device should last for close to a day if you are an average user. For communication, the phone has Wi-Fi, Bluetooth 5.0, GPS. Finally, the device has FM Radio but lacks NFC, which is almost always the case with budget phones. 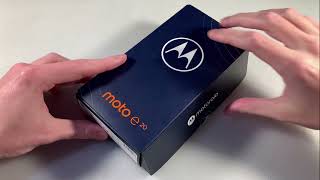