Motorola Moto E32 is a great choice if you are looking for an attractive-looking phone at an affordable price. Its strength includes its battery life and software design. For €150 (approximately $158), it’s safe to say that affordability is its biggest advantage. Like most Motorola phones, it comes with limited bloatware. Seeing how it is a budget phone, the company deserves special praise for it. However, it runs Android 11 out of the box which is disappointing considering the phone’s release date of the 5th of May 2022. The phone uses the Unisoc T606 chipset which turns in poor performance.

Needless to say, you will have to deal with lags if you choose to purchase this phone. The GPU used here is the Mali-G57 MP1. Moving to cameras, the phone’s overall camera performance is average, while it undoubtedly struggles in low lighting conditions. The main 16 MP wide-angle rear camera is capable of taking decent short in well-lit environments, though. Besides the aforementioned camera, Moto E32 has a 2 MP macro, and a 2 MP depth sensor camera on the back. Up front, you have the services of an 8 MP wide-angle camera for selfies and video communications.

Like most phones in the budget category, it has features like LED flash, HDR, panorama, and can record videos in 1080p@30fps. The phone has a 5000 mAh Li-Po non-removable battery that easily gets you over the day on average use. Budget phones usually have great battery life, and this one does pale in comparison to what the competition offers. Motorola Moto E32 supports 18W fast charging, placing it among the better fast charging phones in its class. For communication, the phone has USB Type-C 2.0, GPS, Bluetooth 5.0, Wi-Fi Direct, and a Hotspot.

Much like the battery life, the phone’s display quality is decent as well. It has a 6.5-inch HD+ IPS LCD screen with an aspect ratio of 20:9. While the phone does miss out on an FHD+ resolution screen, it’s got a 90 Hz refresh rate, which isn’t common in this price range. The gadget’s screen-to-body ratio and PPI density are 84.2% and 268 respectively. In the sound department, the phone has a loudspeaker and a headphone jack. Motorola’s phones are often praised for their looks and design, and this one is no different. Moto E32 looks stunning, and it comes in Misty Silver, Pearl Blue, and Slate Grey.

The gadget has a plastic back and frame in addition to a glass front. Furthermore, it has a good build quality and is relatively lightweight at 184 grams when compared to other phones in its segment. As for the dimensions, it measures 6.46 by 2.95 by 0.33 inches. Motorola Moto E32 meets expectations in the sense that it has a water-repellent design. The phone has a side-mounted fingerprint sensor, which is great to see. This is because it’s absent in several inexpensive phones. Other sensors include an accelerometer and a proximity sensor. Its only variant has 4 GB RAM and 64 GB of internal storage. The device has a triple card slot which has room for an SD and two Nano-SIM cards. Connections are only supported up to 4G, though. 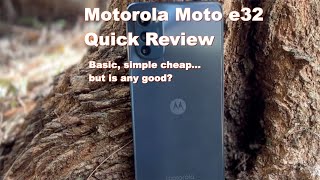 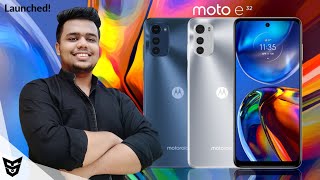