Motorola Moto G (2022) won’t top any value for money smartphone lists. Besides price, other issues include its display quality. However, it is a good choice If you measure value in terms of performance and battery life. Speaking of performance, the MediaTek Dimensity 700 processor delivers great performance. Similarly, the phone’s gaming needs are handled by the Mali-G57 MC2 GPU. The phone runs the latest Android 12 out-of-the-box, which is nice to see. For this, Motorola should be praised, since many new phones still ship with Android 11. The company should also be commended for continuing to provide a clean, near-stock Android experience with most of its phones.

Motorola Moto G (2022) will only get one major Android operating system update, which is disappointing. Therefore, if you care about updates, it’s better to look elsewhere. The phone can easily get you over a couple of days, which is superb. In fact, it is one of the best phones in its segment as far as battery life is concerned. It only supports 10W fast charging, which is a significant con of this device. At this price, you can easily get phones that charge much quicker. When it comes to design, Motorola has done a good job. It’s not only well-built, but it also has a water-repellent design.

Another positive here is that the plastic back panel has a matte finish. This keeps the fingerprints and smudges at bay. Motorola Moto G (2022) measures 6.51 by 2.98 by 0.37 inches and weighs 204 grams, which is a bit on the heavier side. Interestingly, the phone only comes in Moonlight Gray and in a single variant of 6 GB RAM / 256 GB ROM. It’s nice to see that the phone has 256 GB of internal storage, though. You can further extend the phone’s storage by using an SD card. Apart from an SD card, it can handle a single Nano-SIM card and connections up to 5G. As for the cameras, the Motorola Moto G (2022) delivers average performance.

The main 50 MP wide-angle back provides good results but only in well-lit conditions. Besides the aforementioned camera, the phone has a 2 MP macro and 2 MP depth sensor camera on the back, which are just for show. For selfies, it has a 13 MP wide-angle camera. While it does have all the usual camera features, it can only record videos up to 1080p@30fps, which is a bit disappointing. At a starting price of $350, you can easily find phones that support 4K recording. In the sensors department, the phone has a side-mounted fingerprint sensor, accelerometer, gyro, proximity, compass, and barometer. For communication, the device has USB Type-C 2.0, GPS, Bluetooth 5.1, dual-band Wi-Fi, and a Hotspot.

It’s strange to see a phone of this budget miss out on NFC. As previously mentioned, the phone’s display quality is poor, to say the least. The company has opted for a 6.5-inch HD+ IPS LCD screen with a refresh rate of 90 Hz. At this price, most manufacturers go for an FHD+ AMOLED screen. This is a huge downside of owning the Motorola Moto G (2022) and it’s truly impossible to ignore. Its screen-to-body ratio and PPI density are 81.4% and 270 respectively. In the sound department, the phone has a loudspeaker and a headphone jack but misses out on stereo speakers once again. 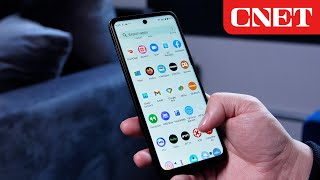 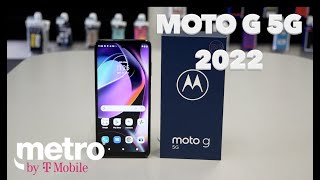